The Russian website of the offshore forex broker FBS, www.fbs.ru, has been unreachable for a while and, according to reports of the Russian-language website Forex Magnates, the broker has suspended its activities in the country without prior notice and has asked its clients to close their positions and withdraw their funds.

At the same time, the Russian-language version of the broker’s main website, www.fbs.com, is working as usual and is accepting new clients, revealed a check of SMN staff. However, there is no information anywhere on the site of the suspension of activities in Russia.

According to the report of Forex Magnates, a representative from the Russian office of the company has confirmed that FBS has temporarily suspended its activities in the country and added that it is planning to apply for a forex broker license from the Bank of Russia, which serves as the country’s financial regulator.

Under the forex broker regulation law, which came into effect in the beginning of 2016, the forex brokers based in Russia must obtain a license no later than January 2017. By the same law the central bank must reply within 60 days after the application was submitted.

At the same time, however, the deputy chair of the Bank of Russia Sergey Shvetsov noted that the regulator has no interest in the popularity of forex trading in Russia. “This product is useless for the population and it does not satisfy those needs we consider important,” he said, quoted by the Russian business news site RBC. “The forex market is a casino satisfying the gambling needs.”

Currently only one company in Russia has a forex dealer license – Finam Forex. Several others have applied as early as December-February, including the Russian market leader Alpari, ForexClub, TeleTrade and Admiral Markets. Their applications, however, are still pending, even though the period in which Bank of Russia must reply, has expired. Meanwhile some of the brokers, like Alpari, are operating through subsidiaries, regulated in other countries.

“We are planning to apply for a license shortly,” the FBS source told Forex Magnates, without specifying when exactly. “So, in a way, we were temporarily forced to suspend services for the citizens of the Russian Federation. But once we get a license, we will get back in touch with our clients in Russia.”

Meanwhile, the website quotes sources who claim that FBS has also withdrawn its membership from the self-regulatory body Centre for Regulation in OTC Financial Instruments and Technologies (CRFIN), of which it has been a member since 2013. By Russian law, the financial services providers in the country must be members of such a self-regulatory body.

An SMN staff check on the CRFIN website revealed that FBS is still on the list of members: 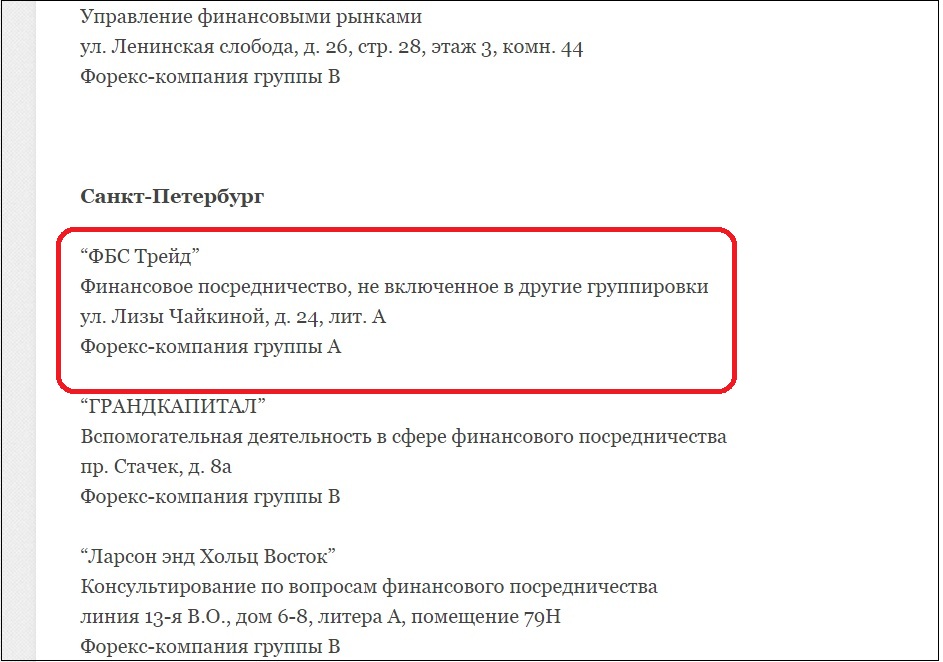 A recent survey of the Russian Interfax-Center for Economic Analysis (Interfax-CEA) revealed that FBS is the 12th- largest broker in Russia with 6000 clients and an average monthly trading volume of $3.9 billion.

FBS was established in 2009. It is regulated by the international Financial Services Commission (IFSC) in Belize. FBS offers trading in the major currency pairs, metals and CFDs. The minimum deposit is $1 and the leverage is up to 1:3000.