Obviously the IPO trend among FX companies intensifies lately, as since the beginning of the year, at least four forex brokers have floated, so we decided to make a comparative analysis of their post-IPO stock price performance. It turns out that the best performer so far is WSE-listed X-Trade Brokers a.k.a. XTB, staging a rise of 7.9% in its stock price in the first 10 days after IPO, and 16.2% increase during the first month after listing.

Here are the figures:

Founded back in 2002, the Polish online forex broker X-Trade Brokers (XTB) is now established in more than 15 countries in Europe, South America and Asia. It is the leading forex broker in Central and Eastern Europe. It listed on the Warsaw Stock Exchange on the 6th of May as X Trade Brokers Dom Maklerski SA (WSE:XTB), making the biggest WSE IPO in 2016 and, as It turns out, scoring the best post-IPO stock price performance so far, compared to the other three FX brokers that went public this year.

What is more, 10 days after XTB has become public, the broker rates 7th among FX brokers in terms of Market Capitalization, outperforming Gain Capital, FXCM, Money Partners Group, KVB Kunlun and recently listed Hirose.  XTB’s total dollar market value of its shares then amounted to PLN 1.46 billion ($0.38 billion) and currently, a month after the company has gone public, it reaches PLN 1.64 billion (USD 0,43 billion), which is 12.3% higher. The company is clearly gaining a momentum with its stock price, undergoing a steady upward trend, yet only time will tell whether XTB will retain its leading position in terms of post IPO stock price performance. 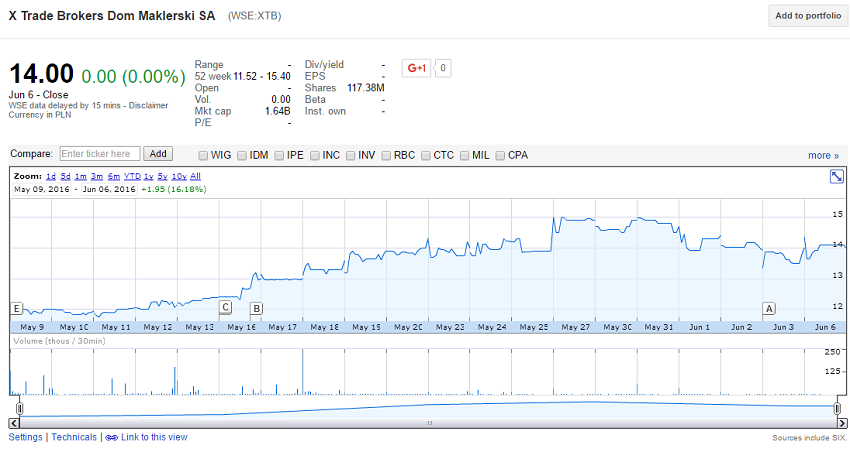 Online spread betting and CFDs trading brokerage CMC Markets PLC (LON:CMCX) listed on the London Stock Exchange on Friday, February 5. The company’s shares have been priced at 240 pence per share. 10 days later, on Feb 15, CMC Markets` share prices were traded for 235.00 pence at market close, about 2.0% less. A month after its initial listing, however, CMC Markets` stock prices register 1.6 % increase.

Another significant milestone for CMC Markets is its inclusion as a constituent in the FTSE 250 Index of the London Stock Exchange (LSE), from the start of trading on June 20, 2016. Furthermore, CMC started providing institutional trading services for CFDs in May and in April it launched a binary options trading platform.

US-based operator of exchanges and services for financial market Bats Global Markets Inc. (BATS:BATS) owns four US equities exchanges – BZX, BYX, EDGX, EDGA, one European equities exchange – Bats Europe, one US options exchange – Bats Options, and one institutional forex trading platform – HotSpot FX, which it acquired in January 2015. BATS Global Markets listed on its own BZX Exchange in mid-April and a month later, on May 16, its shares cost $25.61 apiece, marking an impressive 11.3% increase.

At the end of May, the company was included in the Wilshire 5000 Total Market IndexSM (Wilshire 5000).

Hirose Tusyo Inc (TYO:7185) is a Japanese forex and binary options broker Hirose Tusyo Inc., trading as Hirose FX. The company was set up in 2004 in Osaka and nowadays it operates units also in Hong Kong and Malaysia, and also has a UK-regulated subsidiary, Hirose Financial UK. Hirose’s shares went up by 2% in the first 10 days of trading on the Tokyo Stock exchange, however a month after its IPO, its shares traded for JPY 834.00 apiece, 1.3% lower than the price registered on Mar 18 at market close.

An initial public offering (IPO) or stock market launch is the first sale of stock by a company to the public. Thus a private-held company becomes public, mostly for the purpose of raising equity capital. What is more, it is prestigious, showing that a firm has grown to a size that even the public is interested in investing in. Another key reason for companies to go public, apart from the prestige of being listed, is to allocate the risk of ownership among a larger group of shareholders.

Unlike private companies, however, public ones are subject to strict rules and regulations. They must regularly disclose financial and business information, which is not always in their favor. It is not a secret that nowadays many FX brokers operate several units, one of which holds a trustworthy license and the others are based offshore, and often clients are redirected to the latter. So, it is up to FX brokers to decide whether they can cope with the hardships of being a public company and whether the benefits outweigh the drawbacks.