Although for most people Bitcoin is just a piece of code, it has been trading like gold lately, as investors speculated on the chances of Britain leaving the European Union. Today, however, the price of bitcoin fell $100 in just five hours, dropping 15% to reach a low of $551 on the Bitcoin Price Index (BPI).

Brexit fears have worked miracles for the cryptocurrency, as it reached its highest in more than two years in mid-June: bitcoin price hit the $774 high on June 18. In fact, it is now a wide-spread belief that bitcoin is a “safe haven” asset that benefits from times of market volatility and may be considered an option to hedge against economic uncertainty.

Now that voting is open and polls are showing a reduced chance of Brexit, both gold and Bitcoin have dropped. The digital currency experienced continuous plunge, losing more than 25 % of its value in just 5 days, and slid to $551 today. 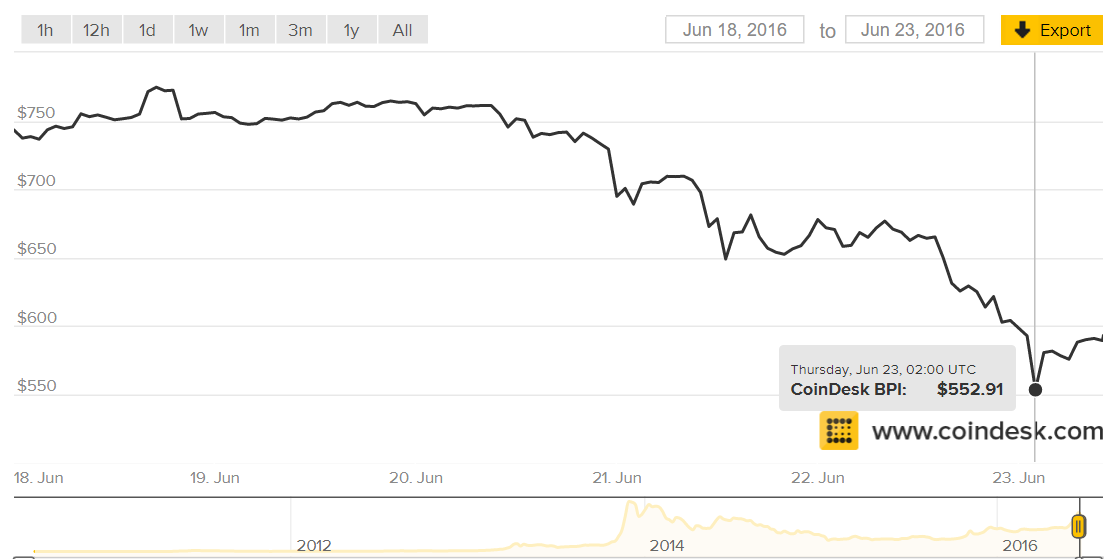 Market analysts warn of increased volatility, as approaching Brexit deadline reflects across the global markets ecosystem, which does include bitcoin. Most forex brokers have already hiked their margin requirements or suspended trades with GBP and/or EUR currency pairs as a preventive measure against high market volatility, which may result in heavy losses.

As bitcoin and cryptocurrencies on the whole are gaining more popularity both among small investors and major banks, US regulators recommended oversight for bitcoin and distributed ledgers in an annual published on Tuesday.