The Japanese brokerage Monex Group (TYO:8698) reported it has maintained profit in the first quarter (April 2016 – June 2016) of the FYI 2017, despite the decreasing trading volume in the market.

According to the data, the consolidated profit of Monex Group for Q1 2017 was JPY 261 million. It is 26.5% less than in the preceding quarter and over the year, the decrease is the significant 85%. From the report is obvious that the only subsidiary that is bringing any profit is the Japanese one. It had a net profit of JPY 673 million, down almost 3.6% from the previous quarter and nearly 63% over the year. Monex explains the lower profits mostly with the one-time expenses of the introduction of the TradeStation trading platform in Japan in March.

At the same time, both the US and the Chinese operations of Monex were at a loss: of JPY 398 million and JPY 11 million, respectively. According to Monex, the significant loss in the US (TradeSation Group) was mostly due to a JPY 145 million one-time expense, related to FX platform business booked as loss on business restructuring due to suspension of the original plan, i.e. the transfer to Oanda of 2000 US clients of the troubled IBFX broker which were using TradeStation. The data, however, shows that the loss was not only because of that as the US segment was in the red last quarter (-JPY 271 million) and five other quarters since the start of FYI 2015. The Chinese subsidiary also seems to be generating more loss than profit for Monex.

The brokerage commissions dropped across all three segments, mostly due to decreasing volumes of trading in stocks, futures and options.

Monex Group also reported that in the end of Q1 2017 its Japanese subsidiary had a total of
1,649,847 accounts (the sum of brokerage accounts and FX-only accounts). Of them active were 1,002,251 (including margin accounts and FX accounts)- accounts with balance (collateral or margin balance for margin accounts, collateral for FX accounts) or the accounts which have traded more than once (including withdrawal) in the past 1 year.

At the same time, the forex segment of Monex’s Japanese operation in Q1 generated a trading value of JPY 9.40 trillion. 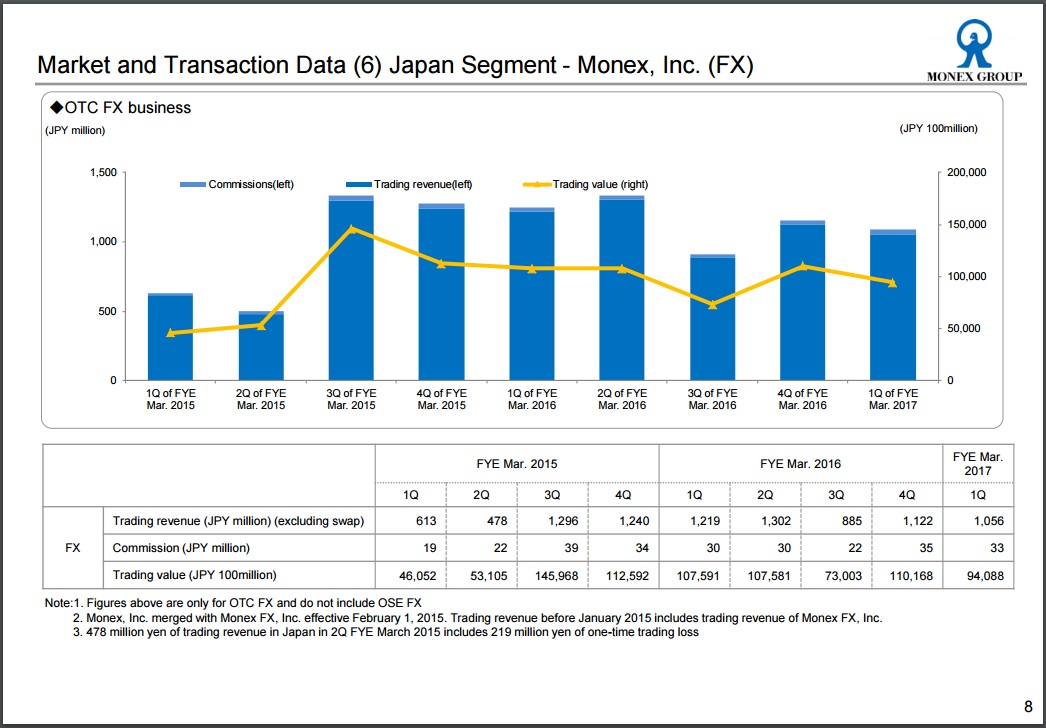 Last week Monex Group released data about June, which showed that both its revenue and profits are rising, in comparison to May, but were still lower than last June.