Monecor London Ltd., the company behind the ETX Capital brand, saw its consolidated net profit drop by 46.4% to £968,000 in 2015, despite consolidated revenue (generated mainly from trading activities) growing 20% to nearly £41.3 million, according to a filing with the UK’s trade register Companies House published over the weekend.

Spread revenue accounted for 87% of the total amount, reflecting a significant increase in transaction volumes. The rest of the revenue came from charges on overnight positions and from the net impact of hedging.

However, the broker had consolidated adjusted earnings before interest, taxes, depreciation, and amortisation (EBITDA) of £4.2 million last year, which represents and increase of 11% from £3.8 million in 2014.

“This growth was driven by the combination of active client numbers and higher average revenue per client. While client numbers grew substantially year on year (36%), reaching 10,000 active customers in a number of months, this growth was attenuated by significantly reduced marketing spend as the Group withheld campaigns as it prepared to launch new web and mobile platforms,” the company said in the filing.

In 2015, ETX Capital acquired the clients of insolvent Alpari UK, which suffered as a result of the Swiss franc-related crisis in the first month of the year. Following the deal, ETX Capital added £10 million of net deposits onto its platform. 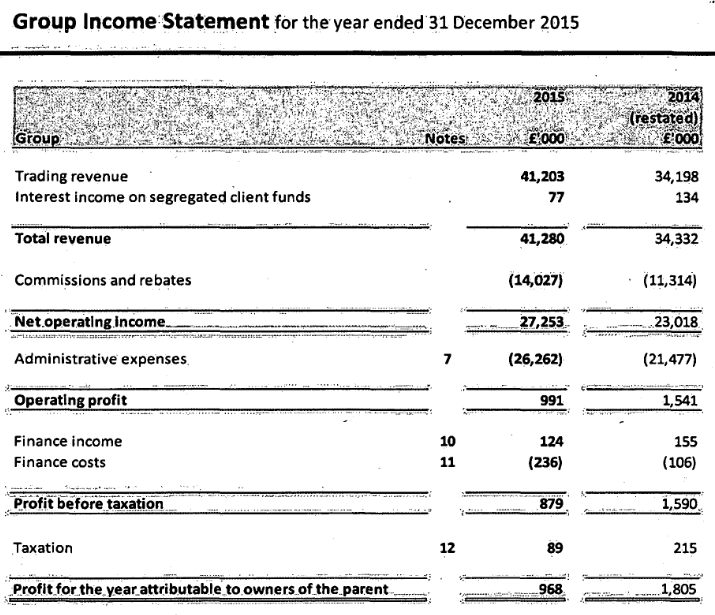 ETX Capital’s consolidated assets exceeded £276 million at the end of 2015, up from £170 million a year earlier.

The broker’s financial results are somewhat in line with those published by other brokers operating in the UK. Following is a comparison of the financial performance of some of the market participants: