The Cyprus Securities and Exchange Commission (CySEC) has granted Cyprus Investment Firm (CIF) licenses to Boson Alfa Ltd. and Newcept Brokers Financial Markets (EU) Ltd., according to two separate notices published on Wednesday on the regulator’s website. The licenses grant rights to holders to provide investment and ancillary services.
No information was immediately available about the two licensees.

The licenses are non-activated, as the regulator issues them that way, and will be activated once the brokers fulfill additional CySEC requirements. Until then, the companies are not authorized to offer the services for which they have been licensed. In Cyprus, financial service providers cannot do business without having an authorization. They need to hold a license from the relevant authorities in the country or in any other EU member state. On its part, a CIF license provides access to and are free to expand within all countries in the European Economic Area (EEA). 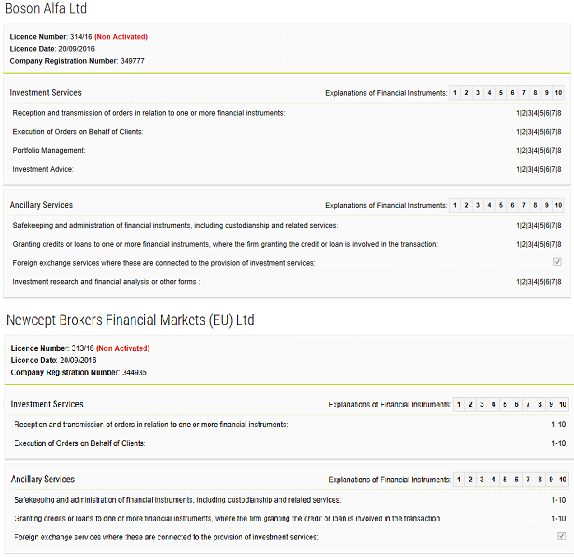 The CySEC provides two types of CIF licenses – limited, under which the financial company can execute orders on behalf of clients, but not on its own account, and full license, which allows an entity to act on both its own behalf and that of clients.

CySEC regulation is preferred by many forex brokers. In addition, Cyprus is known as an area with somewhat strict supervision over licensees, yet less restrictive than in most other EU members.

In the recent months, the CySEC has taken on a more stringent approach and has tightened control over financial service providers regulated in Cyprus. As a result, many entities have parted with their licensees, either at their own discretion or forced by the regulator. The CySEC has been continuously suspending brokers’ licenses for noncompliance with its requirements. Some of these suspensions have turned into license withdrawals or renouncements.