January 3, 2009 is an important date in the history of the world’s first cryptocurrency – Bitcoin. This is when Block 0, “The Genesis Block” was mined. On January 12 the same year was made the first Bitcoin transaction.

Eight years later, on January 3, 2017, Bitcoin is the most popular and most valuable cryptocurrency in the world with a market capitalization of nearly $16.5 billion, putting in on par with the value of an average FTSE100 company. 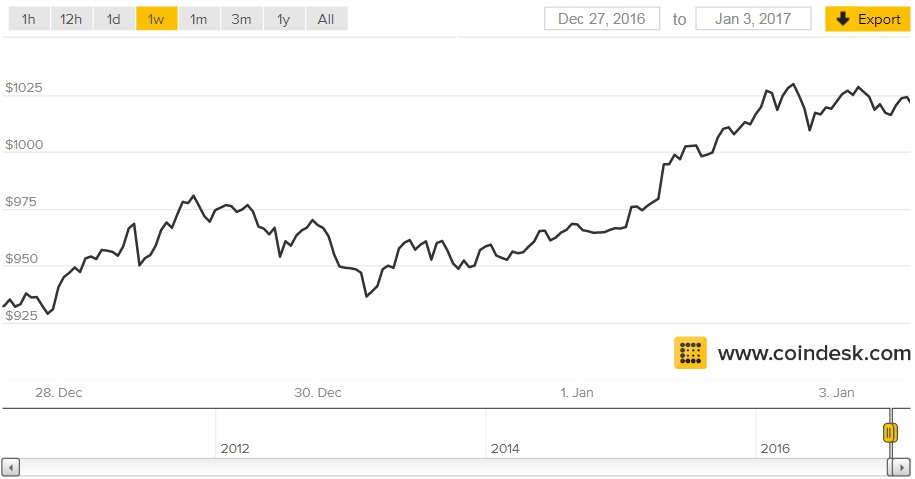 Overall, in 2016 the Bitcoin rose 125% in value and outperformed all central-bank issued fiat currencies.

Analysts are still wondering what is driving the rise of Bitcoin price in the last days of 2016 and the first ones of 2017, many reminiscing of the second half of 2013 when the price rose to unprecedented levels driven by the strong interest from China.

Some argue that this time around Bitcoin’s price is driven by India, which has currency woes with the withdrawal from circulation of the rupee banknotes with the highest denominations, and similar banknote problems in the inflation-ridden Venezuela. Others see China once more as the main driver of Bitcoin price. After all, China is the home of two of the largest Bitcoin exchanges – BTC China and OKCoin, as well as of the most powerful miners who provide a steady supply of Bitcoins into the blockchain.

Whatever the main driver may be and whatever the new price peak may be, we should keep in mind that the Danish investment bank specializing in online trading and investment Saxo Bank said in its Outrageous Predictions that Bitcoin’s price may reach $2100 or above.

“If the banking system as well as sovereigns such as Russia and China move to accept bitcoin as a partial alternative to the USD and the traditional banking and payment system, then we could see bitcoin easily triple over the next year going from the current $700 level to +$2,100 as the block-chains decentralised system, an inability to dilute the finite supply of bitcoins as well as low to no transaction costs gains more traction and acceptance globally,” Saxo Bank’s analysts noted. Naturally, one must have in mind that the Outrageous Predictions of Saxo Bank are usually rather unconventional.