Monex Group, a leading forex brokerage in Japan, reported on Tuesday an operating revenue of JPY 3.7 billion in January 2017, which is lower than the values recorded both on a monthly an annual basis. The figure represents a drop of 8.5% from the preceding month and 16.5% from a year earlier.

The brokerage’s financial expenses, however, went down by 9.2% on the month to JPY 327 million, posting an annual drop of 9.4%.

For the ten months from April 2016, the broker’s sales exceeded JPY 37.1 billion. 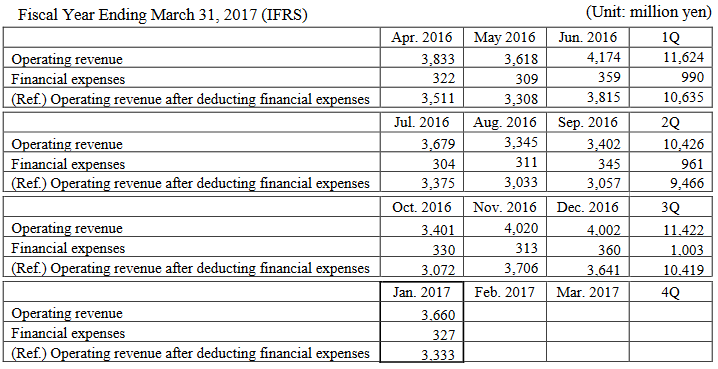 On Monday, Invast Securities, another Japan-based forex broker, reported its operating revenue for January stood at JPY 381 million, or up by 40% from the preceding month and 9.5% from a year earlier.

Monex Group consists of Japan-based holding company Monex Group Inc. and its Japanese subsidiaries Monex Inc., Monex Ventures, Trade Science Corp., Monex Hambrecht, and Monex-Saison-Vnaguard Investment Partners, which is a joint venture in which the group holds a majority stake. In addition, the group owns TradeStation Group, which is in charge of the operations in North America and Europe, and Monex International, aka Monex Boom Group, which is in charge of the Asian business.