Canadian securities watchdogs issued 60 investors alerts against businesses and individuals in 2016, of which more than half dealt with online offers of binary options, the Canadian Securities Administrators (CSA), an umbrella organization of the country’s provincial and territorial securities regulators, said in its 2016 enforcement report.

A large number of the alerts were related to businesses located in other countries that are not registered in Canada to engage in the business of securities trading or advising.

“The CSA is also addressing emerging issues, for example by creating a task force with financial institutions and international regulatory counterparts to address the growing threat of binary options investing, and developing a new national market analytics software program to identify potential misconduct,” said Louis Morisset, Chair of the CSA.

Trading in binary options instruments is allowed in Canada. However, there is not a single broker authorized to provide such services.

“Investors are urged to be cautious about these individuals and companies [that offer binary options trading], and to contact the CSA member in their jurisdiction if they are approached by any of the identified parties,” the regulator said in the report.

Overall, Canada’s securities authorities imposed a combined $62.2 million in fines in 2016, which is less than half the amount collected a year earlier. Most of them, or $36.7 million, were for fraudulent activities. Fines collected for illegal distribution amounted to $9.5 million last year. In comparison, they exceeded $36.5 million in the preceding year. 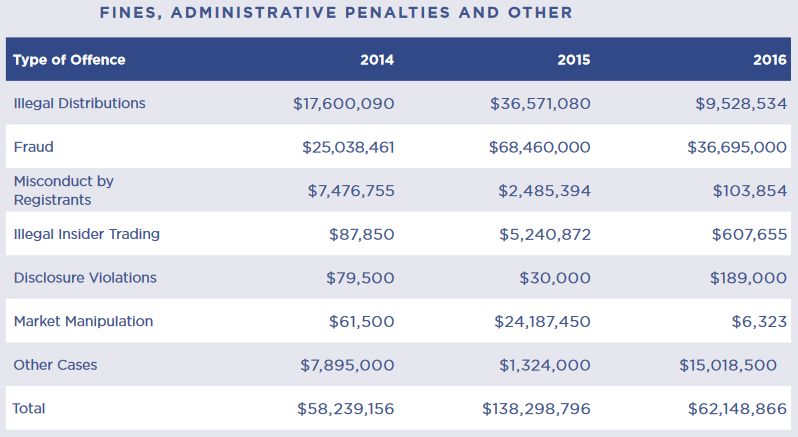 In addition, regulators collected $349.7 million in restitution, compensation and disgorgement fees. The figure is more than triple that from 2015. Frauds again made up the most part of it, or $44.7 million. 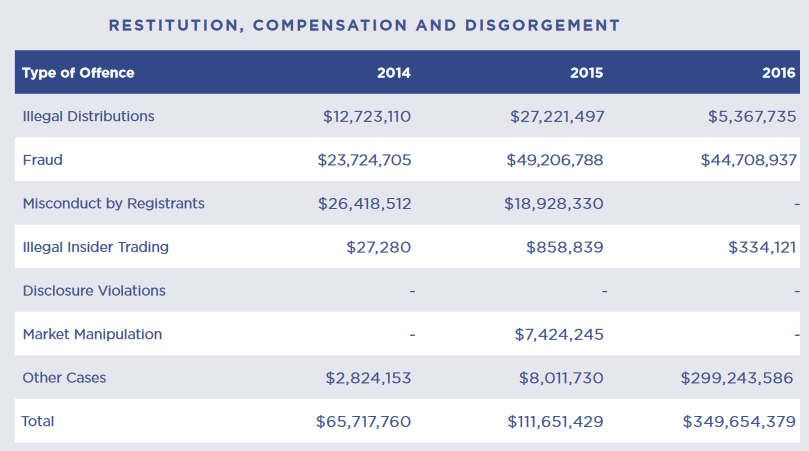 In Canada, financial markets fall under the regulation and supervison of provincial watchdogs and legislation rules may vary in the various provinces. The CSA is the council of the 10 provincial and three territorial securities regulators in the country. It co-ordinates and harmonizes regulation for the Canadian capital markets. The majority of enforcement activities are executed locally, but in some cases regulators of different provinces and territories work together to supervise market players and investigate possible misconduct.