Swissquote Bank (SWX:SQN), a Swiss online financial and trading service provider, posted a 900% rise in its net profit for 2016, shows the annual financial report. According to the data, it stood at CHF 20.8 million. In comparison, in 2015 it was CHF 2.1 million.

The income from the eForex business of Swissquote, however, dropped 2.2% to CHF 52.8 million.

In its statement Swissquote notes its overall business results for 2016 remain in line with the revised forecasts despite the challenging environment (Brexit, US elections, Turkey) and the negative SNB interest rates.

According to Swissquote the eForex business posted a substantial growth in 2016 and clients’ assets under custody are to be increased further over the next few years to ensure that trading volumes and income grow accordingly.

Swissquote Bank provides online trading, analysis, and financial and information services. The Swissquote Group is headquartered in Switzerland and holds a bank license issued by the Swiss Financial Market Supervisory Authority (FINMA). The company has more than 200,000 retail and institutional clients serviced through its offices in Dubai, London, Malta and Hong Kong.

Swissquote Bank has 63 currency pairs in its product portfolio. For trading the bank offers mini, standard, and premium accounts and three trading platforms – the industry leader MetaTrader 4 (MT4), as well as FXBook and Advanced Trader. 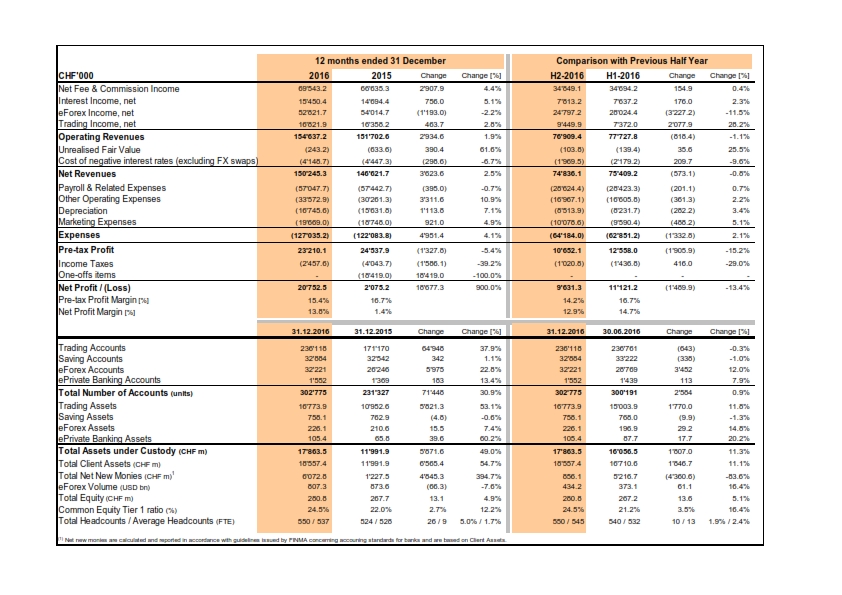