US forex brokerage Gain Capital Holdings (NYSE:GCAP), operator of the Forex.com brand, reported its consolidated net income jumped significantly to $35.3 million in 2016, which represents a growth of 243% from the preceding year.

The broker had an operating profit of $57.7 million last year, posting an increase of 228% from a year earlier when its operating profit was $17.6 million. Overall profit in the retail segment amounted to $115.7 million and in the institutional one – $5.4 million.

In Q4 alone, Gain Capital posted a net revenue of $115.8 million, or up by an annual 12.7%, and net income went up 90% on the year to $20.8 million. The broker reported a record-high quarterly adjusted earnings before interest, taxes, depreciation, and amortization (EBITDA) of $36.9 million in Q4, up from $21.4 million a year earlier.

“Gain Capital closed out a milestone year with a strong fourth quarter performance, as increased trading volatility and continued progress scaling and diversifying our business helped drive record quarter EBITDA,” said the broker’s CEO, Glen Stevens. “We are pleased that we have completed a successful integration of the City Index business, exceeded our $45 million cost synergy targets, while optimizing the combined business to realize meaningful margin expansion,” he added. 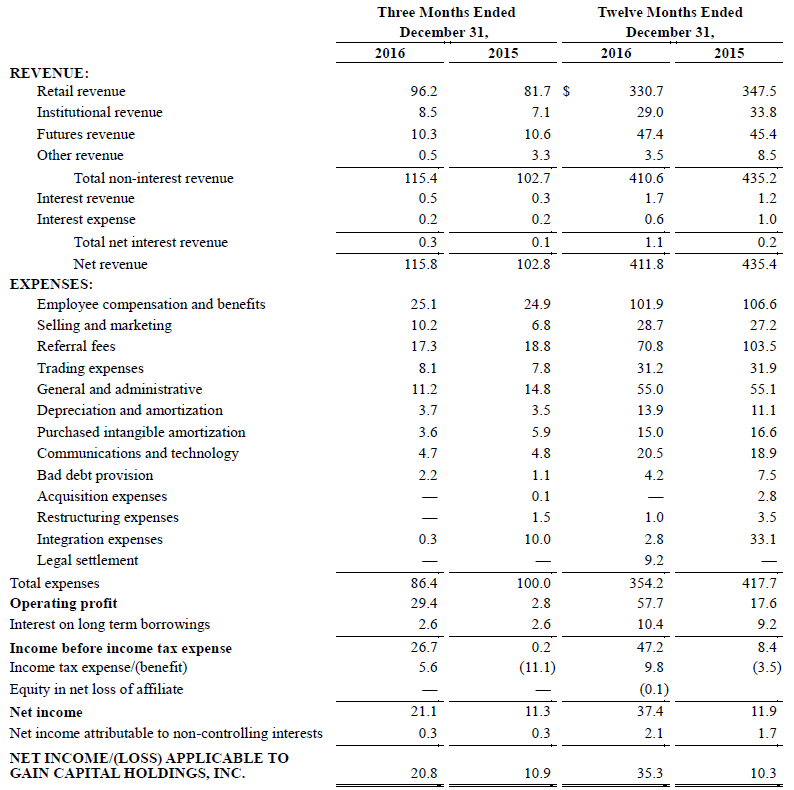 It seems that Gain Capital’s plans for business expansion may be including mergers and acquisitions. The broker hinted of further inorganic, as well as organic growth plans, but provided no details.

“Looking forward, with our solid balance sheet, strong brands and global reach, we are well positioned to grow the business both organically and inorganically and further our long-term objective of growing market share leadership in our retail, institutional and futures businesses,” Stevens noted.

At end-February, Gain Capital finalized the transfer of the US customer base of peer FXCM, which was kicked out of the US market due to fraudulent activities. As a result, Gain Capital’s Forex.com’s customer base has grown to over 70,000 customer accounts, which makes it the new largest provider of retail forex in the US. The broker is to pay its peer either $250 or $500 for each transferred client, depending on the trading activity.

“Following the first week of trading post-transaction, we are very pleased with the response to our Forex.com offering and the trading activity of the transferred accounts,” Stevens said. “The acquisition of FXCM’s US client base is a prime example of Gain Capital’s ability to successfully consummate M&A opportunities within a consolidated industry,” he added.