Global Brokerage Inc. (NASDAQ:GLBR), formerly known as FXCM Inc., reported on Monday it turned to net profit of $43.9 million in 2016 from a net loss of $932.8 million in 2015 when it suffered from the Swiss franc’s (CHF) unpegging from the Euro (EUR).

Expenses, on the other hand, nearly halved to $285.2 million last year. 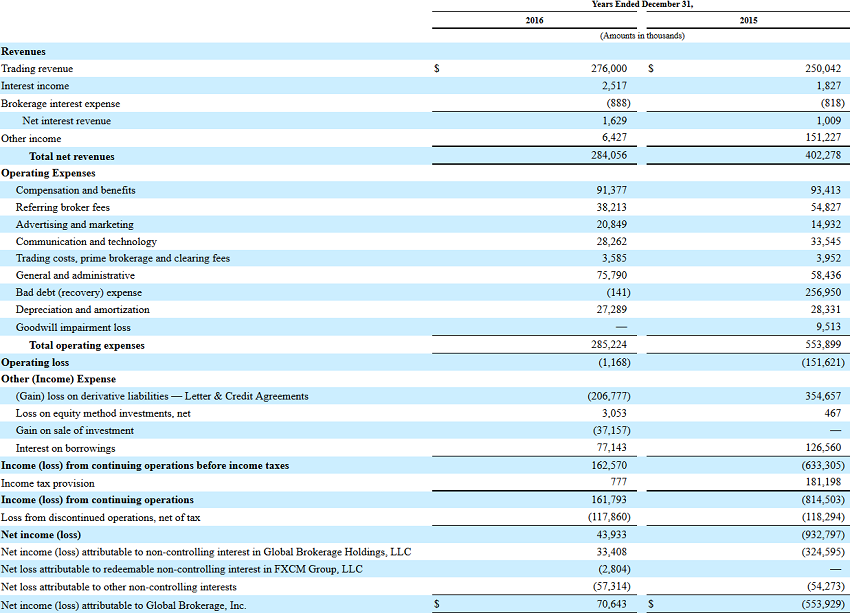 In Q4 alone, the broker’s net revenues amounted to $80.6 million, which is 20.3% higher on the year. Trading revenue from continuing operations for the quarter was $79.5 million, compared to $65.4 million a year earlier.

Global Brokerage Inc. pointed two key business strategy for 2017 – reducing debt incurred from the Leucadia financing and accelerating the growth of its core business by expanding and promoting its forex and CFD offering.

In 2015, the broker drew a $300 million cash credit from US lender Leucadia National Corp. Its clients experienced heavy losses and generated negative equity balances of combined some $225 million as a result of the CHF-related crisis in early 2015.

Global Brokerage Inc. is a majority stakeholder in FXCM Group. The remaining 49.9% in the group are in the hands of Leucadia. The bank has said it would receive up to 65% of future FXCM cash distributions after principal and interest are fully repaid.

In February 2017, Forex Capital Markets LLC, FXCM group’s US arm, was forced to exit the US, where it was the largest market player, and sold its clients there to peer Gain Capital. The brokerage said at the time the proceeds from the sale were to be used for partial repayment of the Leucadia loan.