The Cyprus Securities and Exchange Commission (CySEC) announced on Thursday it has fully withdrawn the license of forex broker CommexFX. The move follows a series of warnings and suspensions of the broker’s Cyprus Investment Firm (CIF) license.

The decision was taken in late July last year, but was announced to the public just now. The broker’s website, www.commexfx.com, is non-operational. The Cypriot regulator explained its decision to take its time to announce the license withdrawal with the fact that the broker had until recently been subject to a regulatory investigation.

Under the Cypriot legislation, once a CIF gets delicensed, it has three months to cease providing investment and ancillary services and to settle all license-related obligations .

“CySEC would like to note that, the Company’s notification for the decision regarding the withdrawal of its authorisation dated 25 July 2016 and subsequently the issuance of the current announcement, were not perform until today pending the completion of an investigation by CySEC regarding the Company’s Board of Directors and other relevant persons,” the watchdog said in a statement.

The regulator has found the broker in breach of the Investment Services and Activities and Regulated Markets Law. The company had not complied with the authorization and operating conditions of its license. CommexFX was fined by the CySEC several times before its license was withdrawn.

The CySEC has not yet reflected the license withdrawal on its website. According to the list of CIFs, CommexFX’s license is suspended, not withdrawn. 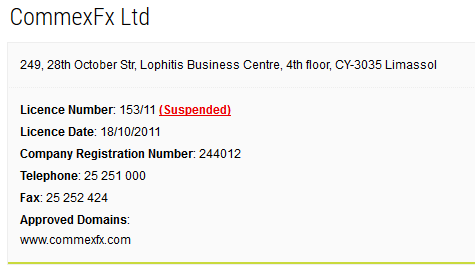 In the past days, the CySEC has been in the headlines of forex industry media. Last week it announced the suspension of the licenses of four binary options brokers – Leadtrade Ltd., TTCM Traders Trust Capital Markets Ltd., Gametech (Cyprus) Ltd., and Dragon Options Ltd. Just days later, it issued another statement with which it withdrew the suspensions.

When engaging with unauthorized and non-regulated brokers, traders are putting their investments at higher risk. We strongly advise you to only deal with regulated forex brokers, authorized by reputable regulatory bodies like CySEC, FCA, and CFTC/NFA, among others.