Forex giant Gain Capital [NYSE:GCAP] announced on Monday its preliminary trading volume stood at $239.2 billion in March 2017, posting a 40.5% monthly growth after the acquisition of the US clients of peer Forex Capital Markets (FXCM), which just exited the market. However, if compared on an annual basis the figure represents a decline of 10.3% from $266.7 billion.

“Market conditions and customer engagement improved in March and we continue to believe that the presence of macro-economic uncertainty, combined with the incremental contribution made by recently acquired FXCM accounts, positions GAIN favorably as we move forward throughout the year,”  said Gain Capital CEO Glenn Stevens.

In the institutional segment, Gain Capital saw its trading volume at $271.7 billion, or up by a double digit both over the month and on the year by 22.6% and 60.7%, respectively.  Futures contracts numbered 827,296. The figure is 40.3% higher from the preceding month and 5.7% more than a year earlier. 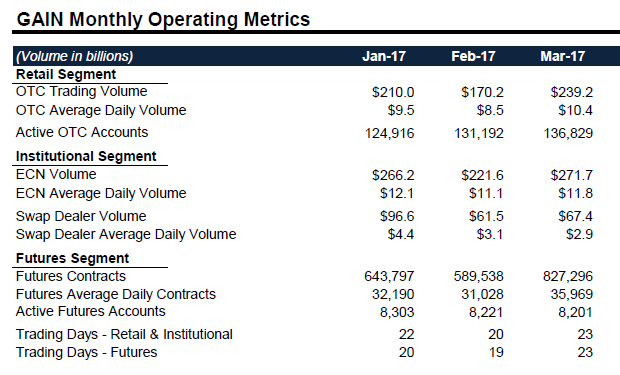 “Market volatility across major asset classes was significantly lower in Q1 2017,” Stevens said. “In particular, there was a narrowing of average trading ranges, which resulted in a sharp decrease in retail revenue per million to approximately 40% below our trailing twelve month levels,” he added.

As of 27 February, 2017, Gain Capital acquired the US client base of FXCM, which was banned it from operating in the country as it was charged with taking positions against customers. The broker added more than 47,000 customer accounts.

Gain Capital operates under the trading brands Forex.com and City Index for retail clients and GTX for institutional operations. It offers trading in forex, commodities, bonds, indices, and global equities, among others. It is active in North America, Europe and the Asia Pacific regions.