The world’s most famous digital currency, Bitcoin, split in two on Tuesday. Miners successfully created a block on a new blockchain, called Bitcoin Cash. The new cryptocurrency was trading at above $200 on its first day, and today it is rated third by market capitalization, after Bitcoin and Ethereum. 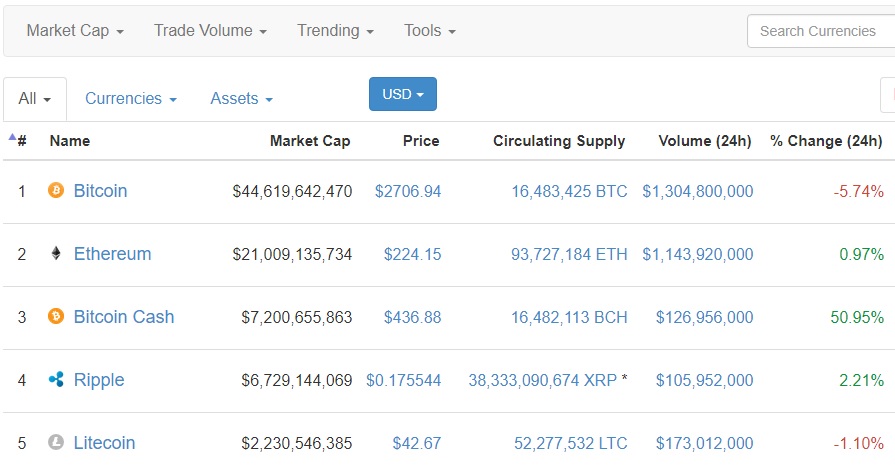 Besides, what might come as a surprise, the new digital currency has not undercut substantially the value of its “parent” Bitcoin by now. The price of Bitcoin fell by below 6% from Tuesday (10 a.m. GMT + 02:00), and is currently traded for around $2,7100 — not far below its all-time high of just above $3,000. Nonetheless, some industry experts are suggesting that its price will drop about 10% to 15% in the near future, as many investors are selling their Bitcoin positions and buying Bitcoin Cash or Ethereum.

The so-called “Bitcoin fork” came about after a group of China-based miners, in charge of bitcoin transaction records, decided to develop a new version of the software in an effort to increase its capacity to process transactions.

Crypto-exchanges where the BCH is available: ViaBTC, HitBTC, Bittrex, Kraken, Viabtc, Bter, as well as Chinese Huobi and Okex.

As nowadays there is an ever-growing interest in cryptocurrencies, a number of forex brokers launched CFD trading in Bitcoin and other digital currencies. As the Bitcoin fork was expected to lead to market disturbances and sharp drop in the cryptocurrency’s value, some brokerages, like Admiral Markets, cut leverage for Bitcoin trading. Alpari also warned it might make some changes to the trading conditions on the BTCUSD and BTCEUR currency pairs from July 31 to August 4 in relation to the expected Bitcoin volatility.