Major forex broker Gain Capital (NYSE:GCAP) released Q2 and First Half 2017 Results on Thursday, which seem much better than the disappointing Q1 metrics. According to the report, its net income in Q2 2016 rose by 29% year-over-year to $13.9 million.

Furthermore, the broker’s net revenue came in at $98.1 million in the second quarter of this year, slightly down from $108.3 million in Q2 of 2016. In comparison, Gain Capital had an adjusted net loss of $18.6 million in Q1 of 2017, attributed to the acquisition of FXCM’s clients after the broker’s dramatic exit of the US market in February. 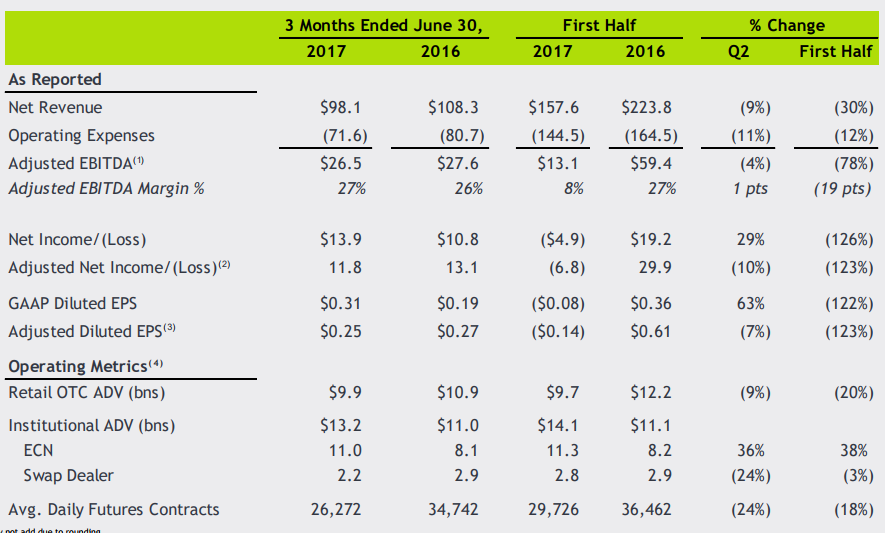 In fact, the Institutional segment of Gain Capital performed better than the retail one in the period under review. The broker’s GTX trading volumes came in at $715.7 billion for the three months ended June 30, registering an increase of 35.8% compared to Q2 of 2016. Retail volumes at Forex.com, on the other hand, amounted to $646.4 billion in the period under review, down by 9.1% from Q2 of 2016.

The report also states that in the second quarter of this year, Gain Capital focused on returning capital to shareholders through buybacks and dividends, which amounted to a combined total of approximately $7.6 million.

“The year-over-year growth in our bottom line and stable adjusted EBITDA margin of 27% underscore the impact of our fixed cost savings initiative, which remains on target for a total cost reduction of $15 million in 2017 and run rate savings of $20 million in 2018,” commented Glenn Stevens, CEO of GAIN Capital. “We believe that this initiative, coupled with increased client retention and acquisition through investments in customer-focused technology and opportunistic acquisitions, will ultimately enable us to grow margins, generate additional free cash and drive value for our shareholders,” he added.

Gain Capital Group was established in 2003 and went public on the NYSE in 2010. The company serves retail and institutional clients under the trading brands Forex.com, CityIndex, GTX, and Gain Capital. It is active in North America, Europe and the Asia Pacific regions. The broker offers trading in forex, commodities, and global equities. Its largest retail forex broker, Forex.com, also offers white label solutions for other forex brokers, operating throughout the world.