Hong Kong’s regulator, the Securities and Futures Commission (SFC) reported a 4.3% increase in the intermediary licenses  in 2015, year-on-year. In the three months to 31 December 2015, the total number of licensees and registrants was up 12.3%, compared to the same period of the previous year and at the end of the year reached 41 466. In comparison, at the end of 2014 the number was 39 739.

Compared to the preceding quarter, however, the number of applications submitted in the last three months of 2015 – 1916, excluding the applications for provisional licenses, and was 20.7% less.

The third quarterly report for the financial year, ending in March 2016, covers the period from October 1 to December 2015.

In the last three months of 2015 the SFC received 5490 applications to conduct new regulated activity and 1916 for SFC license. 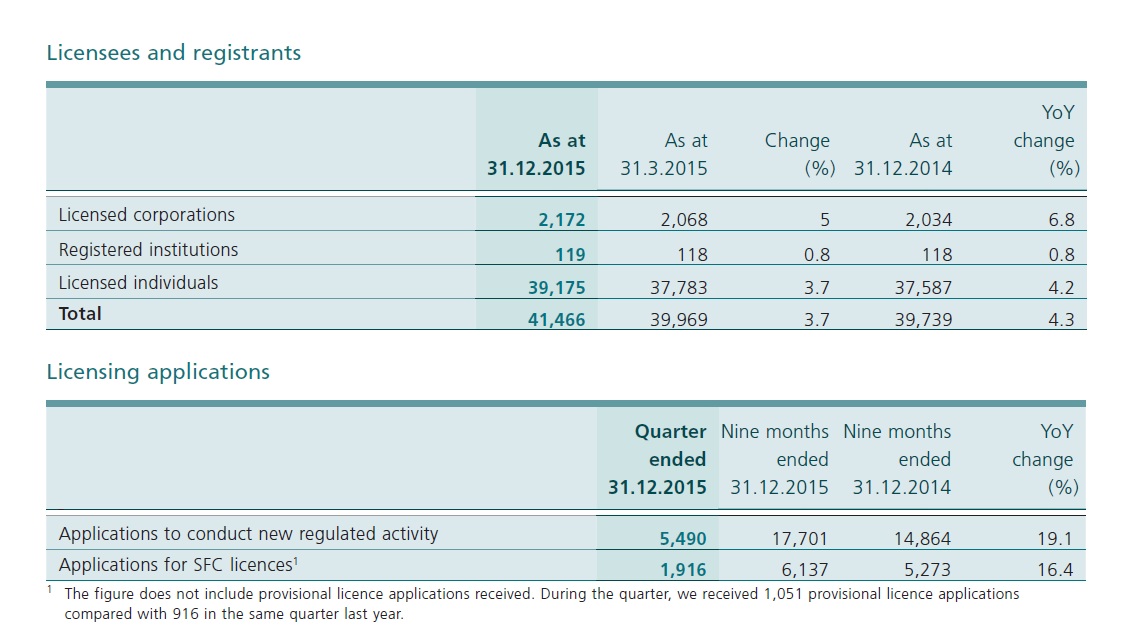 At the same time the regulator’s income for the period was $348 million or 2% less than the previous quarter, most likely due to the decrease in the number of license applications. The Commission collected $34 million in fines from four licensed corporations and eight licensed representatives. In Q3 of the financial year, ending in March 2016, the SFC’s deficit was $68 million.

The SFC is an independent watchdog regulating the securities and futures markets in Hong Kong, including the Hong Kong stock exchange. It is one of the four financial regulators in one of the major global financial centers. The others are the Hong Kong Monetary Authority, Office of the Commissioner of Insurance and the Mandatory Provident Fund Schemes Authority.

Among the fores brokers, regulated by the FSC are FXCM, Forex.com, Saxo Bank, Gain Capital and GMO Click.