The capital markets regulatory bodies across Canada have imposed orders for the collection of more than $254 million in 2015 from fraudulent financial service providers, according to a report issued by the Canadian Securities Administrators (CSA), an umbrella organization of Canada’s provincial and territorial securities regulators. Regulators imposed fines and penalties of combined more than $138 million last year and another $111 million in restitutions, compensations and disgorgement.

The CSA said enforcement cases typically fall into one of six categories, although in some cases they may be relevant to more than one category. Nearly half of cases closed last year could be categorized as illegal distributions.

Following is information about the amounts of fines imposed in the past three years (by category): 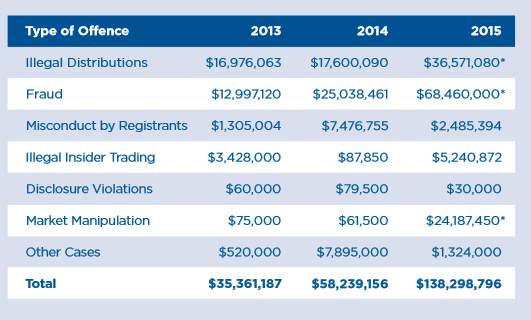 The regulators prevented the loss of more than $13.5 million by issuing 35 orders for the freezing of the assets of 84 companies and individuals.

A total of 31 cases were appealed last year, of which 18 were rendered a decision.

The CSA  keeps a database with all concluded cases since 2011. Some more information about the completed and commenced enforcement proceedings in the past three years follows:

In Canada, financial service markets fall under the regulation of provincial watchdogs and legislation rules may vary in the different provinces.

The Canadian securities market cap was estimated at about $2.4 trillion in 2015. There were 3,034 companies and 123,883 individuals registered in Canada and authorized to operate in the market last year.

The CSA is the council of the 10 provincial and three territorial securities regulators in Canada. The majority of enforcement activities are executed locally, but in some cases regulators of different provinces and territories work together to supervise market players and investigate possible misconduct.