Swissquote Bank (SWX:SQN), a Swiss online financial and trading service provider, has added push notifications to its FXBook and Advanced Trader mobile applications for Android devices, according to data on the Google Play Store. Users of the two apps can subscribe to notification topics of their choice and receive notifications even when they are not actively using the apps.

Swissquote Bank issued the updates of the two Android apps on Monday.

The updates also allow Advanced Trader users to create a demo account directly through the app, which was previously not possible. Traders using this app can now add orders during weekends, as well. 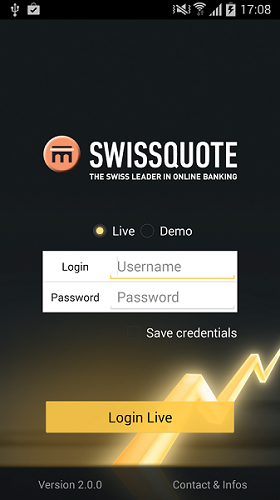 Advanced Trader, a proprietary product of Swissquote Bank, is a trading platform and an information tool at the same time. It allows live trading and demo trading with real quotes. It provides access to the forex, commodities and indices markets. The platform is also available as a desktop application or a web platform. Mobile users can also download the Advanced Trader app on iOS devices.

FXBook is also a trading platform developed by Swissquote Bank that allows live and demo trading, market news and information. It is available for devices with iOS operating system. In addition, the mobile platform has Apple Watch support.

The two trading apps don’t seem to be positively accepted by all users, judging on the comments some users have left. They complain that logging into demo or live accounts using any of the two apps is not always successful and that the apps often crash. Even though most users have rated the two apps with 5 stars, or the highest possible, they both have average ratings of 3.3-3.4 starts on the Google Play Store.

Swissquote Bank provides online trading, analysis, and financial and information services. The Swissquote Group is headquartered in Switzerland and holds a bank license issued by the Swiss Financial Market Supervisory Authority (FINMA). The company has more than 200,000 retail and institutional clients serviced through its offices in Dubai, London, Malta and Hong Kong.

Thousands of Android smart devices have been affected