Russia’s commission for the regulation of relations on financial markets KROUFR said on Monday it has included forex broker EU Broker Age to its black list for acting suspicious and presenting a fake KROUFR certificate. The KROUFR said the broker has dubious reputation and referred to it as ‘fake’.

In addition, the broker has also uploaded a certificate, also a fake one, for being selected for best broker for 2015 by the KROUFR. 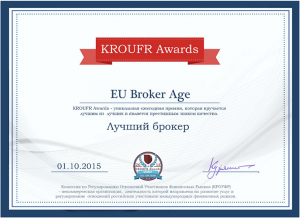 Despite its claims, EU Broker Age has not participated in the Moscow Forex Expo 2015 and thus has not received a diploma for best institutional broker from the event. The one published on the broker’s website is also fake, according to the KROUFR.

EU Broker Age claims to be based in UK’s London and Russia’s Moscow. It offers forex and contracts for difference (CFDs) trading services. No data regarding regulation has been provided.

In Russia, local forex brokers are required to hold a license by the Central Bank of Russia (CBR) and to be a member of a self regulatory organization (SRO) with at least ten members in order to target local citizens. However, such restrictions do not apply for foreign brokers.

KROUFR, set up in 2006, is a non-profit organization that aims to develop services and regulate the relationship between Russian participants of global financial markets, forex included. It provides mediation services in case of dispute between its members and their clients. Its members include online brokers TeleTrade, FreshForex, Forex Club, and Larson&Holz.

The commission’s black list consists of 16 entities, with EU Broker Age being the last one added.