The Danish investment services and retail forex broker Saxo Bank reported a net loss of DKK 645 million (USD 98.2 million) for the year 2015. This result was to be expected, considering the bank’s own forecasts after the surge in the value of the Swiss franc in January 2015, caused by the Swiss National Bank’s decision to remove the euro peg for the Swiss franc. The move had adverse effect on a number of Saxo Bank’s clients margin collateral and they did not have enough funds to cover their losses. 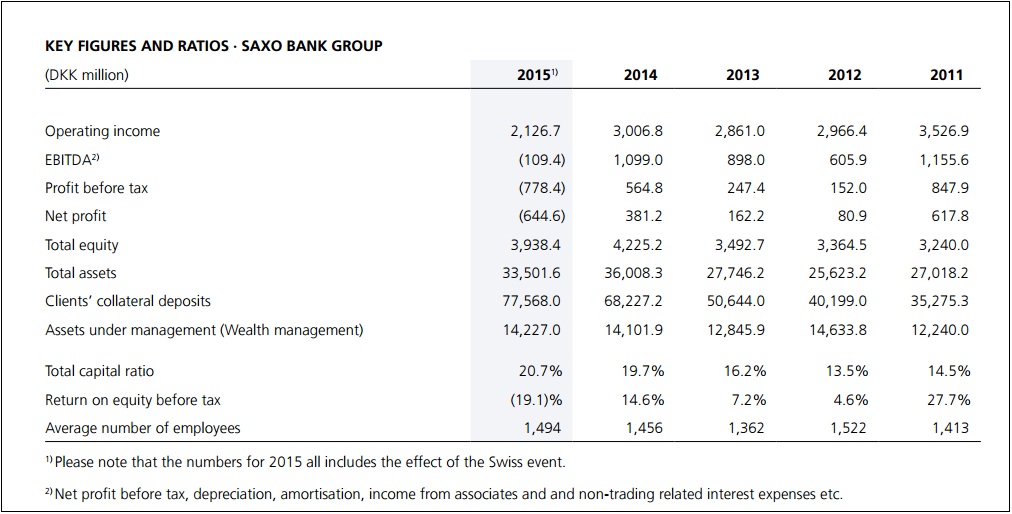 “The financial results reflect a difficult operating environment for our industry in 2015 and were heavily affected by the Swiss events of January 2015. This coupled with uncertainty around the global economy has unsurprisingly hindered our operating revenues in 2015. At the same time, we have continued to strengthen our capital position and build on the foundations for earnings recovery when market conditions improve”, said Kim Fournais, CEO of Saxo Bank. “Despite the difficult environment, our strategy of diversification of revenues and investment in technology is validated in the record client inflows we have seen in 2015. We are particularly pleased with the successful launch of the SaxoTraderGO platform,” Fournais added.

In its report Saxo Bank says it expects global economy to continue to face both political and economic obstacles and low inflation, which supposedly will translate to better conditions for investors. The analysis also shows the market volatility will increase and would lead to higher trading activity by the bank’s clients.

Meanwhile, the March 2016 results of Saxo Bank show a drop both on monthly and yearly basis of forex trading volumes.  Earlier this week Saxo Bank announced its expansion in China.

Saxo Bank, founded in Copenhagen in 1992, is a brokerage firm and a market maker. It holds a banking license from Denmark’s Financial Supervisory Authority (FSA). It offers trading in more than 30,000 instruments, including forex, binary options, CFDs, stocks, futures, and bonds through its proprietary online trading platforms SaxoTrader and SaxoTraderGO, which has versions for Android and iOS devices.