US-based automated forex broker Interactive Brokers said on Monday its daily average revenue trades (DARTs) slightly increased by 1% over the month to 662,000 in April 2016. The figure represents a growth of 5% if compared to the same month a year earlier.

In April, the broker’s annualized average cleared DARTs was 444 per client, compared to 446 in March. The broker handled 349,000 client accounts last month, which represents a growth of 1% over the month and an annual increase of 15%.

Following are details about Interactive Brokers’ monthly metrics for the first four months of 2016: 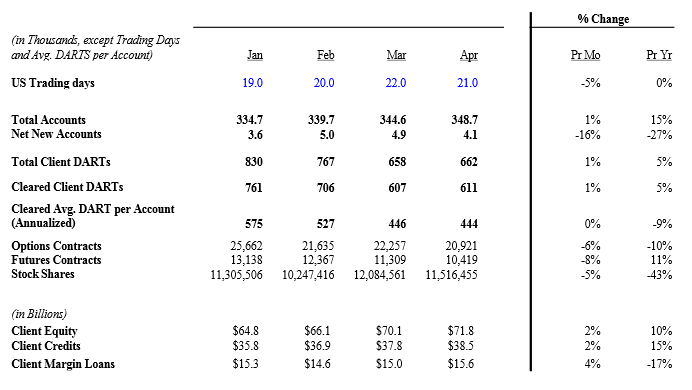 Clients of Interactive Brokers paid on average a commission fee of $3.8 per cleared order, compared to $3.78 a month earlier. The amount includes exchange, clearing and regulatory fees. Commissions varied depending on the instrument type. More data for the commissions the broker’s clients paid in February on the most popular trading instruments follows:

Interactive Brokers’ ending client credit balances amounted to $38.5 billion last month, or 2% higher than in March and 15% higher than the prior year. Meanwhile, ending client margin loan balances were 4% higher over the month at $15.6 billion in April, which was a decline of 17% over the year.

Connecticut-based Interactive Brokers is a broker and a market maker. Through its numerous subsidiaries, the company offers online automated trading in stocks, options, futures, forex, bonds, contracts for difference (CFDs) and funds. It serves traders, investors and institutions in over 100 market across the globe.

The brokerage has offices in the North America, Europe, Australia, and Asia. The group companies holds licenses by the relevant authorities in the US and the UK.