Japanese internet conglomerate Rakuten Inc. reported on Thursday the revenue of its broker subsidiary Rakuten Securities stayed flattish both over the quarter and the year to nearly JPY 12.2 billion in January-March of 2016.

The broker’s operating income, however, dropped 20.4% year-on-year to and 9.9% on the quarter to JPY 4.7 billion in the first quarter of the year. This is the lowest value the broker has posted in the past two yearsm except for the second quarter of 2014 when its operating income was slightly over JPY 3.7 million.

The holding company said its securities services are suffering from the negative impact of volatile market conditions in the stock segment. It refrained from providing a forecast for this segment.

Meanwhile, Rakuten Securities’ trading volume from stock broking stood somewhat low at some JPY 11 billion in the first three months of the year, which is 5.6% lower than a year earlier, yet 9.4% higher than in the previous quarter. 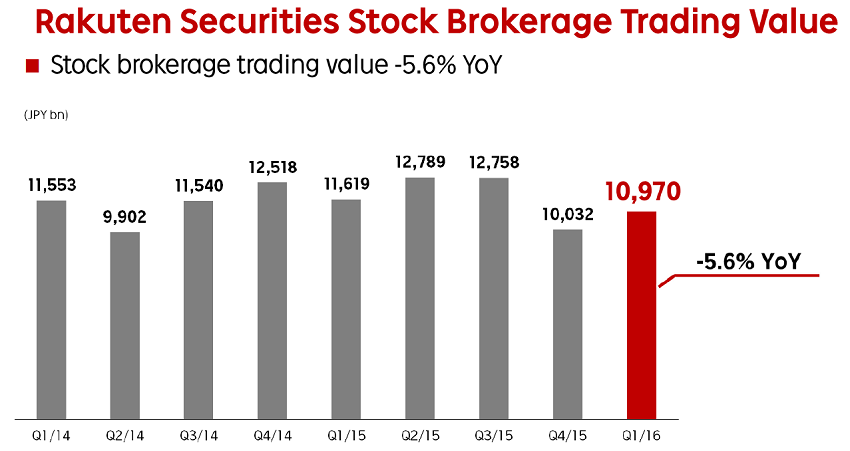 Earlier this month, the broker announced it will include MetaTrader 4 (MT4), the world’s most popular forex trading platform, to its offering, starting end-August this year. It already supports the platforms Market Speed FX and iSpeed FX. The move is rather uncommon, since Japanese forex brokers usually rely on their own, in-house forex platforms.

Rakuten Inc. is a holding company and its subsidiaries are active in a number of intenet-based businesses, including finance, retail e-commerce, travel, e-money, and internet banking. It is listed on the Japanese stock exchange.