France’s financial watchdog, the AMF, has released its annual report for 2015. It reported that in six year the losses from online trading on “fraudulent sites” reached the staggering 4 billion euro. They were incurred mostly from high-risk investments, such as online trading in forex and binary options in particular.

In 2015 the AMF responded to 14421 requests for information. About 75% of them were from individuals and 82% of them were regarding forex and binary options brokers.

Alongside the report, the AMF released a letter its head, Gerard Rameix, sent to French president Francois Hollande. In addition to the general description of the situation on the French and European financial markets and the priorities of the AMF for 2016, Rameix voices his concerns regarding the online high-risk trading, to which the general public is easily exposed. In his missive Rameix notes that in spite the joint efforts of the AMF, the banking and financial services overseeing body ACPR, the competition watchdog DGCCRF and the Public Prosecution of Paris, “4 billion euros of savings have evaporated in 6 years on fraudulent websites”. Therefore, the AMF head calls for the adoption of the new bill, called Sapin 2, which would improve transparency, combat corruption, facilitate the modernization of the French economy. Among other measures, the new bill also bans the online advertising of investment products with high risk of losses, including trading in forex. “I hope this will limit the exposure of individuals to these dangers,” Rameix wrote in his letter. According to AMF data, last year forex and binary options trading accounted for 35% of all online investment advertising in France.

It seems, however, that Rameix will not limit AMF’s efforts to curb advertising of binary options trading only to the internet. Also on Tuesday, he told French journalists he was concerned that the binary options brokers are now advertising themselves through the League 1 football teams. He said the AMF has “made contact” with these football clubs “to try to explain to them the risks hanging over their public”, according to the AFP news wire. Several of the teams are Paris Saint Germain, which has a sponsorship deal with OptionWeb, Olympique Lyonnais, sponsored by 24option and OGC Nice, which has a deal with Interactive Option. 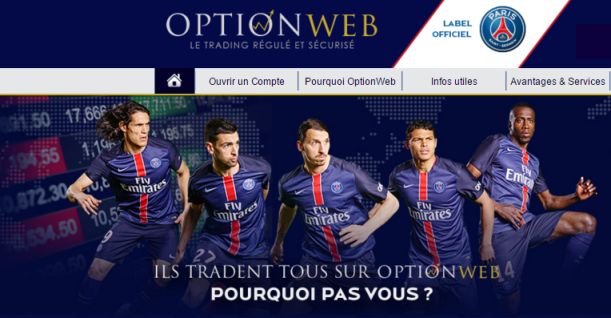 In its report, the AMF notes that for the first time it has “attacked” the “high frequency trading” with exemplary punishment of 5 million euro against the US electronic trading firm Virtu Financial and fined a similar amount the European stock exchange Euronext.