Forex and contracts for difference (CFDs) brokerage group Forex Club has released an update to its proprietary trading platform Libertex, with which the broker allows the re-investment of profit, it said on Friday. The new feature is available for trading in currencies, equities, and spot-metals gold and silver.

Traders can use the profit they have acquired to boost their buying power by increasing the amount of transaction in the same tradable instrument thanks to which they generated profit in the first place.

After the update, the Libertex platform also allows users to increase the maximum amount of active transactions and to automatic expand trading in CFD instruments. In case a CFD instrument expires, traders using Libertex can use a setting which allows the automatic extension of the expiration date.

Meanwhile, regarding the function for higher amount of active tracnsactions, the broker noted that in cases when a transaction’s amount is close to the maximum allowed loss levels, it can be automatically closed in case of a random price jump and in order to avoid this investors need to increase the transaction amount and provide the necessary margin of safety.

In addition, Forex Club has included an educational module on the iOS mobile version of the platform. 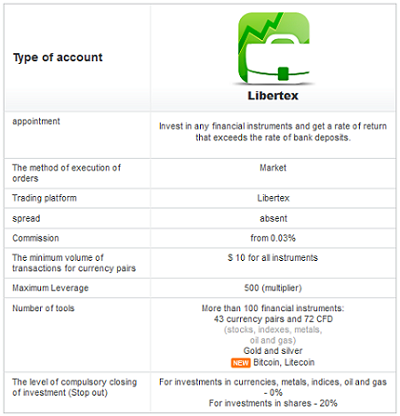 Libertex, launched in 2013 by Forex Club, is designed for trading in forex, stocks, indices, metals, oil and gas. The platform started with a limited offering, which has been growing over time. The platform is available in a web-based version, as well as as a mobile platform for Android and iOS. The Android app alone has between 1.0 million and 5.0 million installs.

It features a multiplication function which enables them to trade risk assets with multiplier of less than ×1 for effective risk management, as well as an automatic control of profit and loss which enables the setting of stop loss and takе profit levels where trades are automatically closed.

In the beginning of this month, Forex Club announced the release of Polkvadrata, its latest proprietary trading platform. It did not provide much information at the time. The broker also offers three other trading platforms – MetaTrader 4 (MT4), Rumus, and StartFX.

Forex Club is a collective brand of several entities that provide trading in forex and CFDs on shares, metals, indices, and other instruments. The brokerage has clients in more than 120 countries.

Forex Club aims to further expand its presence within the Commonwealth of Independent States (CIS), or the former Soviet countries. Through its subsidiary Financial Company Forex Club, the group recently became one of the first two to obtain a status as a registered forex brokerage in Belarus (the equivalent of obtaining an authorization). It is also awaiting to receive a license from the Central Bank of Russia (CBR) for a Russian forex broker.

The brokerage’s Russian arm is a founding member of CRFIN, a Russian self-regulatory organization (SRO).