The Cypriot financial regulatory body, the Cyprus Securities and Exchange Commission (CySEC), said on Tuesday it has decided to continue the suspension of the Cypriot investment firm (CIF) of forex broker UBFS Invest powered by Moneychoice Brokers. The decision was adopted on 27 June, 2016.

The broker’s license was initially suspended on 23 May since it has allegedly been in violation with the CySEC regulation. UBFS Invest has a period of one month when it has to take action to comply with the regulator’s requirements.

During the suspension period, the broker is not allowed to perform any investment or financial activities within Cyprus or the EU or take on new clients, nor is it allowed to advertise itself as an investment company. It also has to allow clients to close all open position and receive their funds and profits back, if requested by them.

The reason for the suspension is that UBFS Invest has not complied at all times with the Cypriot regulator’s authorization conditions, regarding its policy for protection of clients’ funds in particular. Moreover, the broker’s own funds seem to appear less than the required amount, according to the regulator, and its total capital ratio appears less than the required. The CySEC regulatory framework envisions that “a CIF must have own funds, which are at all times more than or equal to the sum of its capital requirements.”

The broker has already published a notice on its website regarding the license suspension. 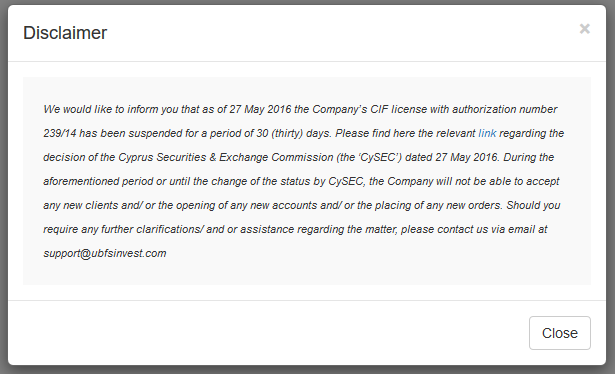 The website also states it is in the process of updating and is not accessible. 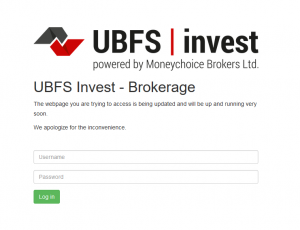 Recently, the watchdog has been somewhat harsher on licensees. In the past months, it has imposed a number of license suspensions, some of which have turned into license withdrawals, both voluntary and forceful. However, still many brokers chose to be regulated and licensed in Cyprus. Since Cyprus is a EU member state, financial service providers licensed by the CySEC are also eligible to do business in the rest of the EU market.