Russia’s commission for the regulation of relations on financial markets KROUFR blacklisted on Tuesday investment company MASS RESERVE Trust Management Company Inc., doing business as Mass Reserve. The commission has received a number of complaints against Mass Reserve from clients of the company claiming their money back.

According to KROUFR’s statement, Mass Reserve represents a high-yield investment program that offers a stable daily income of 1,27%, or 463% per year. However, the company provides no guarantee of fund payment and its business model seems questionable.

The entity’s website, www.mass-reserve.com, is not functioning since it is “under DDoS attack” and “the origin web server is not reachable“. 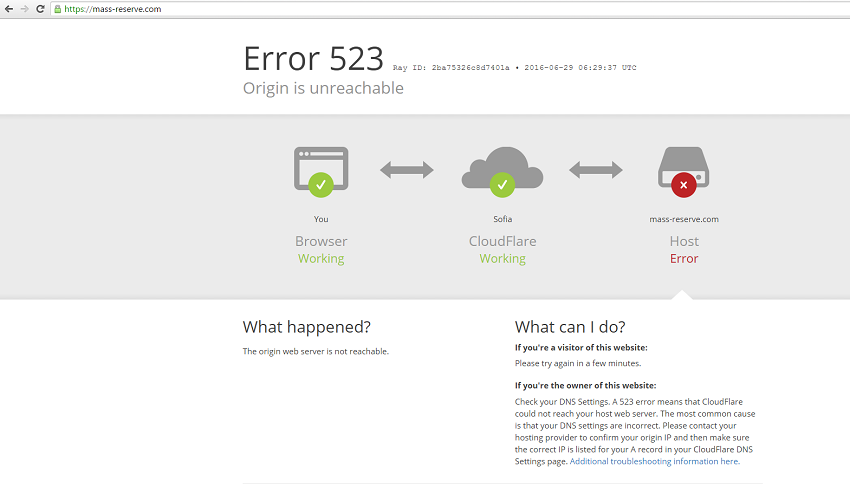 With the addition of Mass Reserve, KROUFR’s black list consists of 24 websites that present risk for investors. The KROUFR warned investors to be cautious and to beware of fraudulent schemes, especially of blacklisted entities.

KROUFR, set up in 2006, is a non-profit organization that aims to develop services and regulate the relationship between Russian participants of global financial markets, forex included. It provides mediation services in case of dispute between its members and their clients. Its members include online brokers TeleTrade, FreshForex, Forex Club, Larson&Holz, and trading platform UTIP.

In Russia, local forex brokers are required to hold a license by the Central Bank of Russia (CBR) and to be a member of a self regulatory organization (SRO) with at least ten members in order to target local citizens. However, such restrictions do not apply for foreign brokers, as a result of which most market participant continue to operate in the country through their foreign units.

In mid-March this year, the CBR established a register of SROs and has already included several such organizations, but KROUFR is not one of them.  It said at the time that organizations that have been active as self-regulatory bodies for at least a year will receive a registered SRO status within a two-month period, but some well-known SROs are still missing from the register. One reason for this are the contradictory rules under which a SRO can only be registered if at least one of its members is a licensed forex broker, while forex brokers can obtain a CBR license only if they partake in a SRO with at least 10 members.