Belgium’s Financial Services and Markets Authority (FSMA) has published a warning regarding a cryptocurrency and exchange called OneCoin noting that neither it, nor the persons promoting it are recognized or authorized by the watchdog. “The FSMA once again warns the public of the risks associated with virtual currencies,” the FSMA added.

According to the publication, the warning was prompted by Facebook statements of one Laurent Louis who said the FSMA has nothing to say about OneCoin and it does not pose any problems and is neither illegal, nor a fraud. According to the watchdog, however, those claims were false and misleading. Furthermore, the FSMA notes, “these claims suggest or imply that the operations in OneCoin are carried out under conditions laid down by the laws and regulations which the FSMA enforces, whereas in fact these laws and regulations do not apply to such operations.”

This is one of the rare occasions when a regulator issues a specific warning for a cryptocurrency or an exchange, but it appears that OneCoin is actually a multi-level marketing (MLM) global scam scheme. According to 2015 publications in the site www.cointelegraph.com, OneCoin.eu and the One World Foundation were scam operations. Quoting documents and other evidence, Coin Telegraph claims the owner and COO of OneCoin, the Bulgarian Dr. Ruja Ignatova, was making false claims about her qualifications, while other two people in the foundation, Sebastian Greenwood and Nigel Allan, have been involved in other scams before. Greenwood, along with Ignatova, have been involved in another similar fraud – Prosper Club/BigCoin back in 2014.

At the same time Ethan Vanderbuilt, a self-proclaimed internet scam buster, also warns OneCoin is a scam. He quotes a warning by the Bank of Hungary from the summer of 2015 and a report to the Swedish police by the local gambling watchdog.

Bulgaria’s Financial Supervision Commission has also put OneCoin on a warning list, clarifying that cryptocurrencies are not regulated in Europe, while Latvia’s watchdog warned it appears to be a Ponzi scheme.

According to several publications from 2015 and the spring of 2016 in the Bulgarian business weekly Capital, the company behind OneCoin is registered in Gibraltar. It has recently opened a front office in a central location in Bulgaria’s capital Sofia. The weekly does not directly claim OneCoin is a scam, but implies it is not exactly a cryptocurrency exchange either and the OneCoin, unlike the other cryptocurrencies and can be used only within OneCoin’s own digital ecosystem, which is only partially functioning. Moreover, Capital writes, several companies connected to Ignatova are making massive investments in real estate property across Sofia.

According to OneCoin’s site, the OneEcosystem consists of ten sections, including One Forex, OnePay, CoinVegas, OneAcademy, CoinCloud, etc. OneAcademy, for example, has 2 101 203
“students” who are taking a six-step educational program, which is supposed to turn them into financial experts. There are courses on econometrics, technical analysis, forex trading, risk management, etc. The prices of the packages vary from EUR110 to EUR 27 500.

The company also claims it has mined 749,970,000 OneCoins and has “ global customer base of millions of people in over 195 countries and six continents and is independent of governments”. Small wonder, considering that OneCoin is on a tour and recently held glitzy events in Zagreb, Tokyo, London, Madrid, Istanbul, Helsinki, Pristina, Romania, Kazakhstan, etc, promising spectacular profits and lucrative payouts for those who bring in more people. 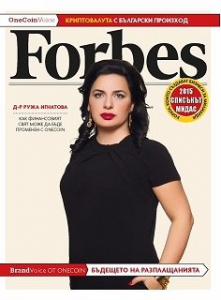 А report from February 2016 in UK’s The Mirror tells of the fantastic promises made during those events, for example “making a million in a month”. The media warns the OneCoin cryptocurrency is worthless because the investments do not buy OneCoins, but the right to mine them and trading packages. A similar report on the website of Finland’s public media Yle, suggests OneCoin is a scam and this particular cryptocurrency has the value of “Monopoly money”.

A quick SMN check on the Coinmarketcap.com site revealed that OneCoin is not listed among the 650 global cryptocurrencies. It practically does not exist.

Meanwhile, Ruja Ignatova claims to have appeared on the cover of the Bulgarian edition of the Forbes magazine. Its editorial office, however, told the Capital weekly it was not a cover, but a paid advertorial in the Brand Voice column and was marked as such.