The UK-regulated forex broker Fortrade informed its clients that it is expanding its instruments portfolio by adding trading on stock of the Japanese consumer electronics and video games giant Nintendo (OTCMKTS: NTDOY), through the broker’s proprietary trading platform Fortrader.

The reason is the rising interest in shares of Nintendo, following the release of the augmented reality mobile video game Pokemon GO in the beginning of July.

Since then the share price of Nintendo, which practically does not have much to do with the game, peaked, bringing the company’s market valuation to $40 billion, surpassing the eternal rival Sony. Then, after last Friday Nintendo put out a statement that Pokemon GO would hardly have any significant impact on its financial results, its share price sank 18% the maximum one-day move allowed by the Tokyo exchange.

In its statement Nintendo, which is one of the oldest and largest producers of video games in the world, clarified that it only has 32% of the voting power of The Pokemon Company, an affiliate that holds the rights to Pokemon and barely 13% of Niantic, the US mobile game developer that developed and distributes Pokemon GO. “Because of this accounting scheme, the income reflected on the company’s consolidated business results is limited,” Nintendo wrote in the notice. 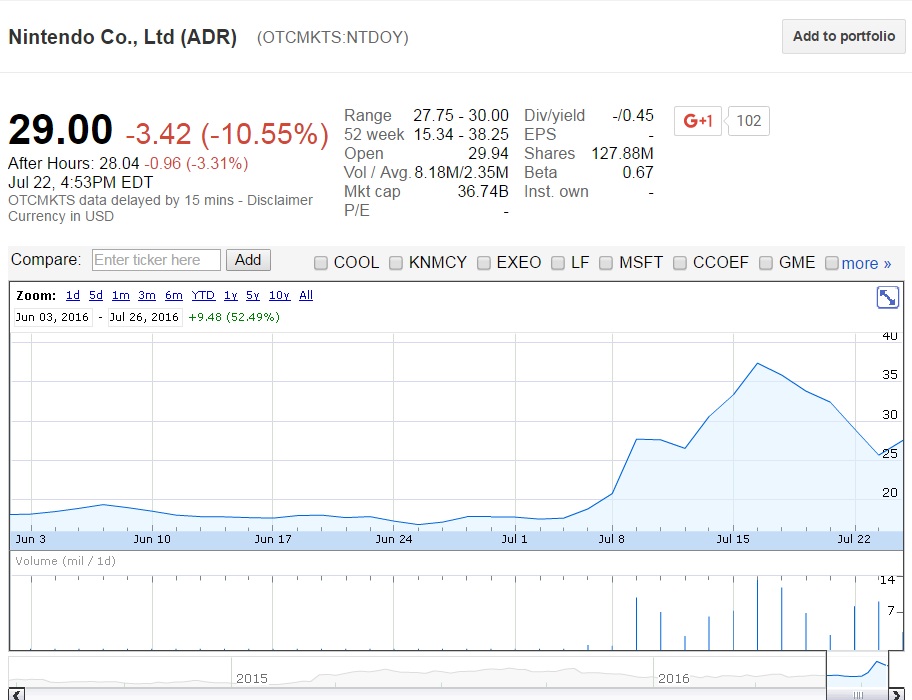 Pokemon GO was released in most regions of the world throughout July, first launching in the US, Australia and New Zealand. According to most recent data, it was downloaded by 75 million people. The game is played on smartphones and players uses the device’s GPS and camera to walk through real locations in order to find, capture, battle and train virtual creatures called Pokemon, that became popular with the Japanese anime series Pokemon in the early 2000s. The game is developed by Niantic, a US company that introduced the concept of augmented reality video games with the game Ingress.

Fortrade is a forex and CFDs broker, regulated by UK’s Financial Conduct Authority. Its maximum leverage is 1:200 on most currency pairs. The minimum initial deposit is 500 EUR/USD/GBP.