Small business loans obtained through UK crowdfunding website Funding Circle have boosted the UK economy by £2.7 billion since the website’s launch in 2010, according to a report by Centre for Economics and Business Research (CEBR) published on Thursday.

“Small business isn’t small – it accounts for half of the UK’s GDP and 60% of employment. That’s why we have created the infrastructure where any investor, whether they’re an individual, financial institution or government body, can lend to small businesses,” said James Meekings, Funding Circle co-founder and UK managing director.

The majority of borrowers, or 61%, saw their revenue increase as a result of taking a loan via Funding Circle. Meanwhile, full 47% of borrowers reported higher profits. These companies have created some 40,000 new jobs in total since 2010.

About 50,000 investors have earned a combined net interest of £95 million from lending money via Funding Circle. More than 15,000 businesses have gained access to financing thanks to the crowdfunding website.

The North region, one that has faced economic hardship and is ongoing a growth-boosting initiative, has also successfully benefited from Funding Circle-facilitated loans. Full 10% of the loans go to small businesses om the North East, which accounts for just 3% of all UK businesses.

Direct lending platforms like Funding Circle are increasingly attracting businesses.  One reason for this is that 72% of borrowers consider obtaining a loans through such a website faster than more traditional lenders. CEBR’s report indicated that full 77% of borrowers initially shopped around for finance, but 94% would come back to Funding Circle first in future. Here is more information about what factors influence businesses to turn to Funding Circle for loan financing:

“Since the financial crisis, UK businesses have increasingly turned to non-bank lending to raise the funds they need to invest, hire new staff and expand to new markets. Companies such as Funding Circle are driving billions of pounds of economic activity and generating tens of thousands of jobs, something that’s set to grow rapidly as the financial landscape continues to evolve,” CEBR director Scott Corfe said.

The share of small businesses seeking financial from direct lending platforms has been steadily growing in the past few quarters. Following are details: 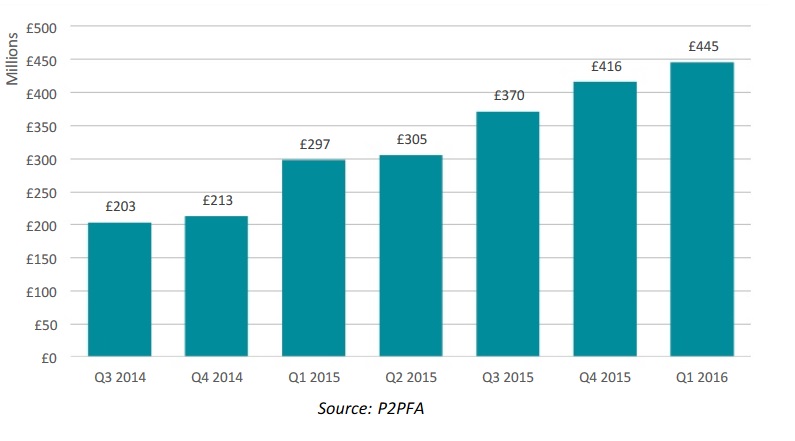 Funding Circles is among the largest crowdfunding websites in the UK. It is loan-based, which means that individuals, organisations, or businesses can borrow financed through a large number of investors, who later receive their money back plus an earned interest. Loans generally range from £5,000 to £1.0 million.