Polish forex brokerage X-Trade Brokers, trading as XTB, saw on Wednesday its shares reaching their all-time lowest price of PLN 10.93 a day after it announced disappointing financial and trading results for the first half of 2016, data from the Warsaw Stock Exchange (WSE) indicated. 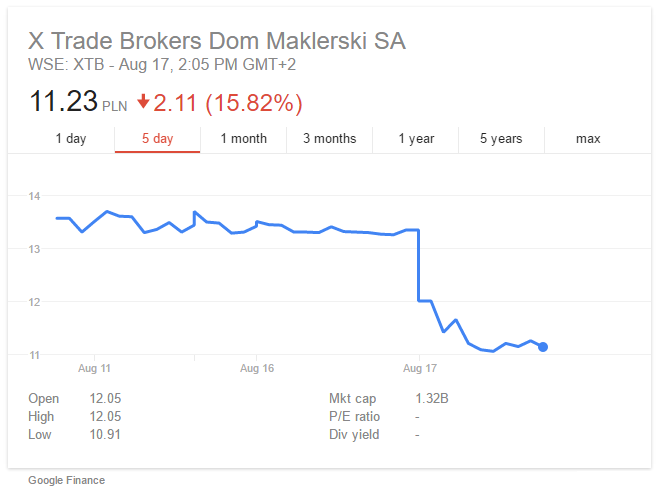 The broker’s net profit declined in H1 2016 on the back of lower trading volumes. It posted a net profit of PLN 23 million in H1 2016, posting a drop of 55% compared to the same period a year earlier.

Operating revenue fell 12% over the year to nearly PLN 113.9 million in the January-June period. Meanwhile, operating expenses increased 46% year-on-year to PLN 95.2 million in the six months under review.

The broker’s trading volume in the retail and institutional segment stood at 1,058,309 in the first six months of the year. The figure is 15.8% below the value reported a year earlier.

The average number of active trading accounts the broker handled in the first half of the year went up by an annual 10.1% to 16,305. Meanwhile, the total number of XTB accounts jumped 25.7% to 139,209 in the period under review. The broker’s clients had net deposited funds with XTB in the combined amount of nearly PLN 136.6 million in H1, which is 6.3% below that a year earlier.

XTB debuted on the WSE in early May 2016 with the release of some 117.4 million shares. Currently, the broker’s market capitalization stands at PLN 1.31 billion.