Peer-to-peer (P2P) lending platform Bondora facilitated the provision of a record-high €2,782,475 in loans in August 2016, the platform said earlier this week. The values represents an increase of 21.5% from the previous all-time monthly highest of €2.28 million just a month earlier.

The majority, or 56%, of loan originations in August took place in Bondora’s native Estonia. The total amount of loans provided in the country was €1,572,785. Spain accounted for 25% of all new loan originations last month. 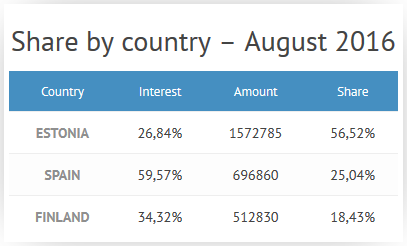 Loan origination grew last month in two countries – Estonia and Spain. Estonia was also a leader by another factor – it was the only country with issued grade A and AA loans. These types of loans had a very low share – 0.93% of all new Bondora loans in August were grade A, while those grade AA equaled 1.96% of the total.

In August, grade C-E loan originations in Estonia took the highest share of 32%. In Finland, 13% of all loans were grade D-F, and in Spain new originations were primarily in the higher interest grades of E, F and HR. Overall, iterest rates were highest in Spain, followed by Estonia and Finland.

Following is more detailed information on the Bondora loan originations in August by country and grade: 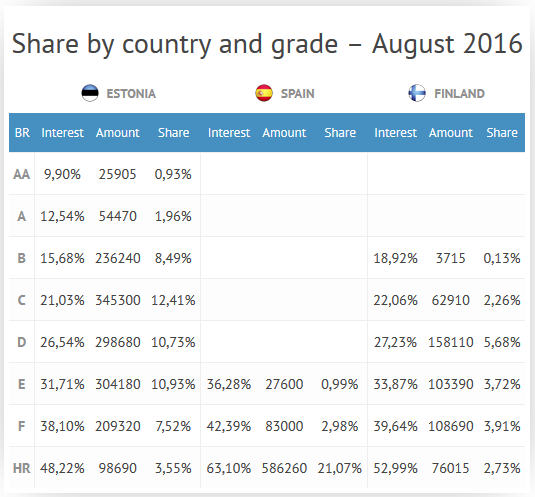 Loan origination is t he full process of obtaining a loan, starting from application to receiving the funds.

Bondora is an leading Estonia-based P2P lending platform. The platform has facilitated the disburse of more than €66 million. The average Bondora loan is €2,370, but loans range from €500 to €10,000. Bondora also operates a secondary market for P2P loans where investors can buy and sell their existing investments.

Bondora is authorized by the Securities and Exchange Commission (SEC) in the US, the Financial Supervision Authority (FSA) in Estonia, and the Regional State Administrative Agency (RSAA) in Finland.