Admiral Markets UK said on Monday it has decreased by 20% the spreads on most contracts for difference (CFDs) on indices.

The broker has cut the spreads on 13 out of 17 of the CFDs it offers. Following is more details on the new and old spreads for the different index CFDs: 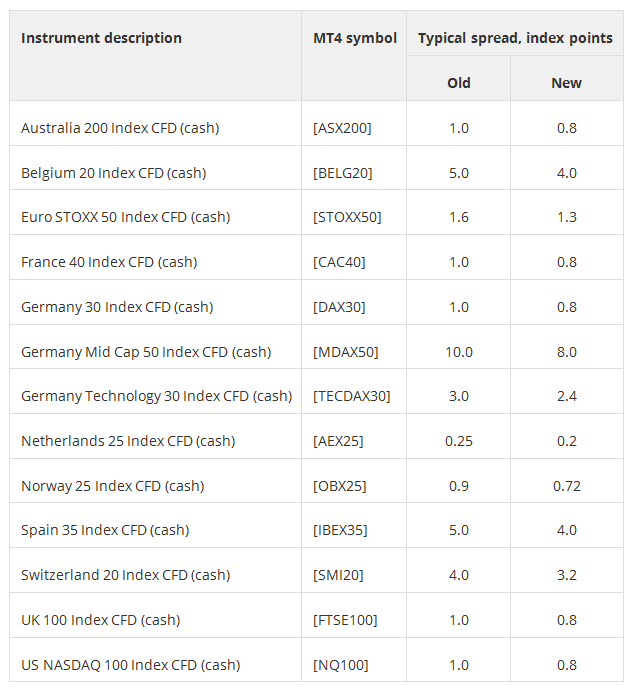 “This may improve trading performance for those using short-term trading techniques, like scalping and high-frequency trading,” the broker said in a notice on its website.

The rest of the the index CFDs will remain with unchanged spreads. Dow Jones CFDs have spreads of 1.0 points, while the spread of CFDs on S&P500 are 0.4 points. CFDs on the Nikkei 225 index and the Hank Seng index have spreads of 6.0 and 7.0 points, respectively.

Spreads are used to measure the difference between the bid and the ask price. Low spreads, coupled with no commission, mean that traders will have less transaction-related costs.

The news comes just a week after Admiral Markets introduced micro lot trading on index CFDs. Throughout the year, the broker has expanded its CFDs offering several times. It added new cash index instruments and improved its trading conditions, including by doubling the maximum order size for cash index CFDs to 100 lots.

Admiral Markets clients can trade in index CFDs at leverage of up to 200:1 and spreads of 1.0 points on 1.0 points on Dow Jones CFD and 0.4 points on S&P500 CFD. These type of products have no expiry terms and can be traded at hours beyond those of benchmark indices.

The broker offers trading in a wide range of instruments, including forex, commodities, indices, shares, bonds.

AvaTrade pays €175,000 for offering CFDs in Belgium without prospectus

The Financial Services and Markets Authority (FSMA) made