IG Group Holdings (LON:IGG), the largest forex broker in terms of market capitalization, generated a revenue from worldwide operations of £111.4 million in June-August 2016, or the first quarter of the current fiscal year, according to a filing with the London Stock Exchange (LSE) published on Tuesday. The figure represents an increase of 5.1% from the already string quarter of the previous year.

The UK and Ireland was the only market where IG operates which posted a revenue drop, even though a rather small one. Revenue from the region was down by an annual 1.8% during the three month under review, resulting from the affect on markets of the UK referendum to exit the EU.

Otherwise, operations in both Europe and Australia generated higher revenue, but the rest of the world had the highest growth rate of 18%.

Active client numbers also increased in June-August by 18% on the year in total. In the UK they grew by 24% year-on-year. New client first trades were also up by an annual 70%, reaching a new record level.

“A high number of new clients beginning part way through the period, combined with the quieter end to the quarter and the ongoing growth of the stockbroking business, resulted in the lower average revenue per client in the UK,” the broker said.

“IG performed relatively well in what was a challenging quarter,” the statement said, noting that the broker is set to deliver future growth.

During the period, IG Group enhanced its offering with new stocks for Australian clients and Limited Risk Account for all clients.

IG Group’s lead regulator is the UK’s Financial Conduct Authority (FCA), but its subsidiaries are also regulated by the relevant authorities in the countries where they operate. It is also a licensed bookmaker by the UK’s Gambling Commission. 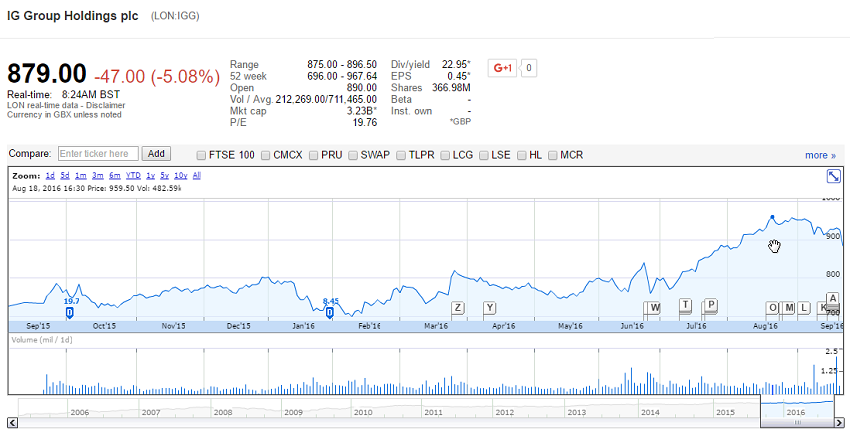 IG Group, a major global forex broker based in