With the launch of the platform, the broker has also introduced new trading account, Rakuten FX, with access to 24 currency pairs. The account can be opened in HK dollars (HKD) or US dollars (USD) with no minimum initial deposit requirement. Rakuten FX account holders pay no commission fees and tight fixed spreads starting from 0.7 pips.

With the addition of Rakuten FX, which is already available to the other companies in the Rakuten Group, the broker aims to strengthen its position in Hong Kong. The platform is wholly owned by Tokyo-based Rakuten Securities Inc., the parent company of the Hong Kong broker.

“After the successful rebranding of Rakuten Securities HK from FXCM Asia in April this year, we listen to client’s feedback and understand the needs of market,” said Kazunori Iida, president of Rakuten Securities HK. “Launching Rakuten FX, offering an ever low trading cost and over 99% order execution rate that definitely revolutionizes client’s forex trading experience,” he added.

In addition to Rakuten FX, the broker also offers trading via the Trading Station platform via a separate trading account. Following is a comparison of the two accounts: 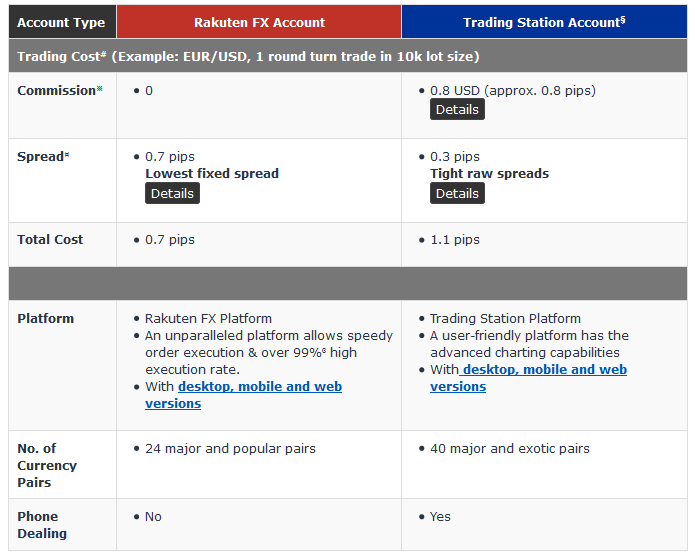 Rakuten Securities acquired in 2015 from US forex broker Forex Capital Markets, or FXCM, its two units FXCM Japan and FXCM Asia. In April 2016, FXCM Asia was rebranded Rakuten Securities HK. Although they are not part of the FXCM group anymore, the two companies continue operations under the FXCM brand using the US broker’s trading system.

Holding company Rakuten Inc. and its subsidiaries are active in a number of Internet-based businesses, including finance, retail e-commerce, travel, e-money, internet banking, and digital content. It is listed on the Japanese stock exchange and operates across Asia, Europe, the Americas and Oceania.