Glistentree Holdings Ltd., the operator of forex brokers www.icetrader.com and non-operational www.gt-fx.org, has renounced its Cyprus Investment Firm (CIF) license issued by the Cyprus Securities and Exchange Commission (CySEC), the regulator said on Tuesday in a notice on its website.

On its website, IceTrader has put a notice, informing clients that Glistentree Holdings has went out of business and the website is no longer operatonal. 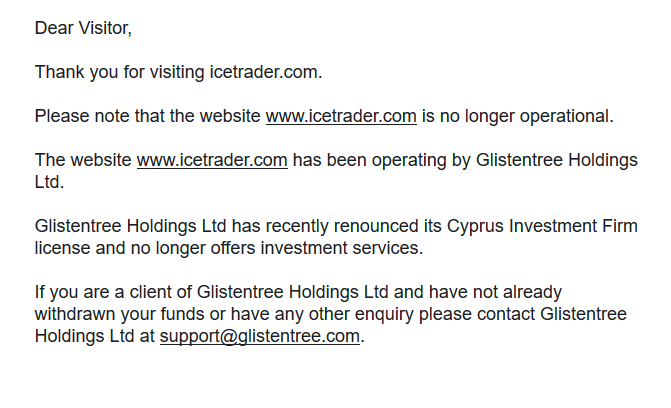 The CySEC did not provide a specific reason for the broker’s decision. However, it noted that in early September it imposed a €100,000 fine to Danny Rothman (aka Daniel Rubinstein), who was a propsed shareholder in Glistentree Holdings, for breaching the investment services and activities and regulated markets law.

As of 10 October, 2016, (the date of revokation), the brokerage is no longer licensed and regulated by the CySEC and cannot provide financial or ancillary services, according to the regulator’s notice. However, for a period of one month, when the broker has to settle its obligations concernint the lapsed activities, the company will remain under the Cypriot watchdog’s supervision. During that time, the regulator will monitor whether the broker returns all outstanding balances to its clients and handles all client complaints, as well as  provides the watchdog with a confirmation/letter from its external auditor that it does not have any pending obligations.

Glistentree Holdings obtained in November 2014 a CIF license allowing it to provide investment and ancillary services in Cyprus and the rest of the markets in the European Economic Area (EEA). The license revocation means that the broker is no longer allowed to offer the services for which it was licensed, neither in the country, nor in the EEA.

In the past months, many brokers have obtained CIF licenses, but many other have said goodbye to theirs, both at their own discretion and forced by the regulator. The CySEC has been increasingly stringent on licensed brokers. It has been frequently suspending licenses for noncompliance with requirements and some of the suspensions have even turned into license withdrawals or renouncements.

Overall, it has been a very dynamic year for the forex market in Cyprus. The regulator has also been very active in imposing sanctions and fines to CIF licensees, as well as suspending and withdrawing licensees for noncompliance. Many entities have parted with their licensees, either at their own discretion or forced by the regulator.