IFC Markets, an offshore forex and CFDs broker, informed its clients it is temporarily hiking the margin requirements on the CFDs on several US companies, due to the expected major corporate announcements in the period October 19-21, 2016.

Hence, in the same period IFC Markets rises the margin requirements from 2.5% to 20% (i.e. maximum leverage is reduced from 1:40 to 1:5) for CFDs on the stocks of the following companies: American Express, Ebay, Verizon, American Electric Power, The Travelers Companies, Microsoft, General Electric, Honeywell and MacDonald’s. 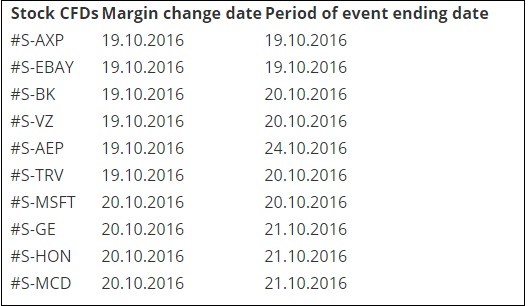 “In this regard, we recommend that you cut the volume of previously opened and future positions to the admissible level of your deposit or that you deposit more funds to your account,” IFC Markets said in its announcement. The broker notes that the expected corporate event may take place before the ending date of the higher margin requirements and they may be reduced to their normal levels earlier.

IFC Markets is based in the British Virgin Islands and is licensed by the local financial regulator, the Financial Services Commission (FSC). It is the trading brand of IFCMarkets Corp., which is part of financial technologies holding company IFCM Group. The group also includes online forex broker IFCM Cyprus, former Infin Markets, which is licensed by the Cyprus Securities and Exchange Commission (CySEC), and financial software developer NetTradeX Corp.