According to the Interactive Brokers’ statement, this was mainly due to lower commissions and execution fees (down 15% over the year) and mark-to-market losses on its U.S. government securities portfolio, partially offset by higher net interest income. The brokerage also notes that unlike Q3 2015, which saw unusually active trading, in this year’s third quarter trading was rather inactive.

The market making segment income before income taxes dropped 85% to $7 million, mainly due to lower trading volumes and decreases in volatility and in the actual-to-implied volatility ratio. The Q3 2016 pre-tax margin of Interactive Brokers from the segment dropped to 16%, from 51% in Q3 2015. 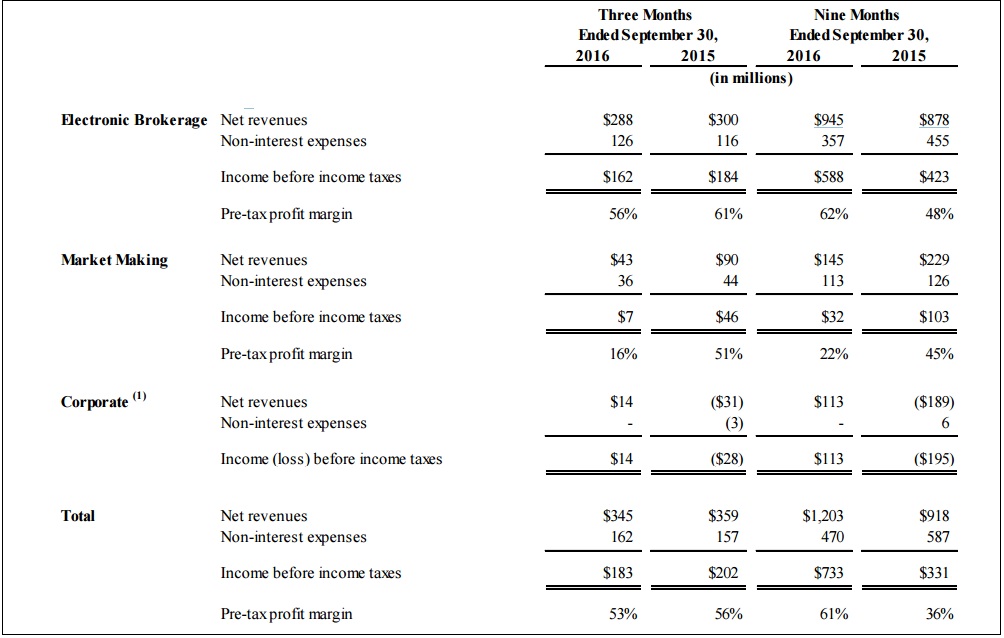 Obviously, the downward quarterly trend continues from the previous quarter of 2016, when Interactive Brokers reported a drop in DARTs and pre-tax income dropped from Q1 2016.

The DARTs decrease is probably mainly due to the extremely low numbers in August, when they were at their lowest since December 2014 and the September increase was not enough to offset the effect.

Connecticut-based Interactive Brokers is a broker and a market maker. It, together with its numerous subsidiaries, offers online automated trading of stocks, options, futures, forex, bonds, contracts for difference (CFDs) and funds to traders, investors and institutions in over 100 market across the globe. It has offices in the North America, Europe, Australia, and Asia. The group companies holds licenses by the relevant authorities in the US and the UK.