US forex brokerage Gain Capital Holdings (NYSE:GCAP), operator of the Forex.com brand, reported on Thursday it turned to a consolidated net profit of $14.5 million in the January-September 2016 period from a net loss of $700,000 a year earlier. Consolidated earnings before interest, taxes, depreciation, and amortization (EBITDA) also increased by 6.1% to $62.7 million.

Meanwhile, consolidated net revenue dropped by an annual 11% to $296.1 million in the nine months under review.

Meanwhile, in the third quarter alone, the broker turned to a consolidated net loss of $4.7 million from a net profit of $1 million a year earlier. During the three months, the broker generated a net revenue from retail operations of $52.7 million and a profit of $6.5 million. In the institutional segment, net revenue amounted to $6.9 million and profit was $1 million in July-September. Gain Capital also reported its revenue from futures trading services stood at $12.5 million, while profit was $1.4 million.

“The challenging market conditions of the third quarter resulted in lower than expected average daily volumes and revenue capture,” said Glenn Stevens, CEO of GAIN Capital. “However, the volatility outlook is improving as a result of several market drivers including Brexit, global interest rate uncertainty and the US elections,” continued Mr. Stevens. 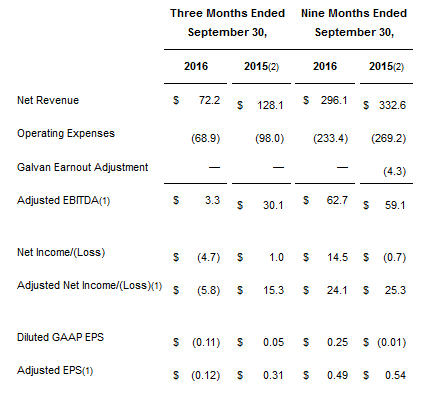 The broker announced it may buy back own shares worth combined up to $30 million. Whether this will happen and at what time, as well as what amount will be invested, will depend on factors such as the market conditions and the trading price of the broker’s stocks. The decision has been backed by the board of directors.

In the meantime, Gain Capital published data about its trading volumes from retail and institutional clients posted a monthly decrease in October. The broker’s main competitor, Forex Capital Markets (FXCM) is yet to publish financial and trading metrics for the past period.

Gain Capital got FXCM’s US clients for $7 mln