The UK equity crowdfunding market is set to close 2016 with more than £130 million new equity issuance, posting a slowdown in momentum for the first time, according to a report of financial markets analytics provider AltFi Data. The segment is expected to facilitate young companies in the UK raise more than £130 million growth capital in 2016.

“Our extrapolation suggests that 2016 looks set to be the first year in which the full year origination amount is dwarfed by the previous year,” AltFi Data’s report read.

The report includes data for all equity crowdfunding in the UK from 2011 (when when the industry was started), covering a total of 955 equity crowdfunding rounds and 751 companies. The data refers to six platforms that offer equity crowdfunding services – Crowdcube, Seedrs, SyndicateRoom, Venture Founders, Code Investing (previously CrowdBnk), and Angels Den, the last one of which was new addition for 2016.

Since 2011, the sector has provided over £368 million of equity capital to growing UK companies. 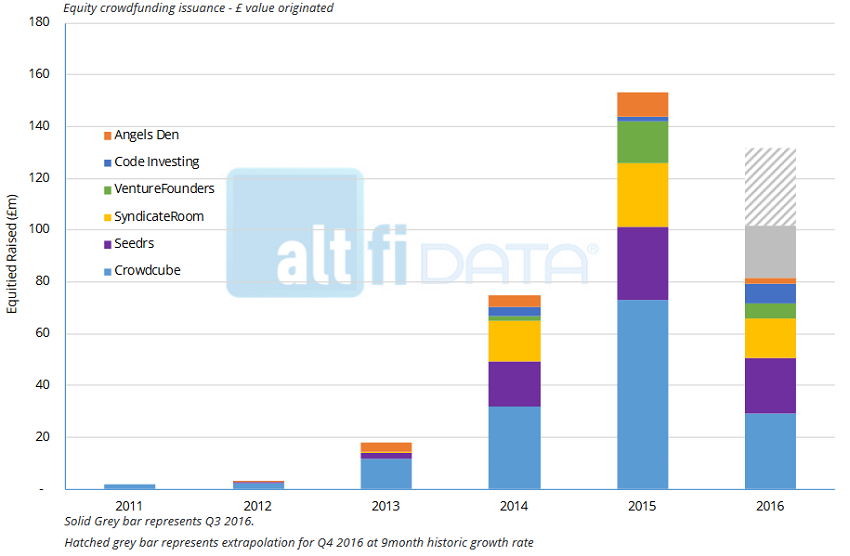 In Q3 2016 alone, the equity crowdfunding market also slowed down. The uncertain environment, including the Brexit vote, made UK businesses, especially those in early stage of development, reconsider their plans concerning equity issuance, since this type of financing instrument involves significant planning.

AltFi Data’s report indicated only three platforms contributed to the equity crowdfunding volume in the July-September period. There is a marked shift towards the larger players in the third quarter, while a number of the smaller platforms have not funded any new deals during the three months.

“If confidence returns in Q4, there may be pent up demand and a ready pipeline of deals on hold to drive a re-acceleration in Q4. But, without a rebound, the industry may need to re-adjust for a lower rate of growth, and that could mean a shake out of the smaller players,” AltFin Data said in the report.

Following are details about the funded volume for first nine months of 2016 (and 2015) of the six UK equity crowdfuning platforms included in the report:

An interesting new trend that the report indicated was that equity crowdfunding platforms are becoming rather specialized in facilitating financing in a certain sector. For instance, Crowdcube dominates the consumer discretionary segment, while Seedrs is a leader in the financial businesses sector and Syndicateroom is specialized in healthcare.

The UK crowdfunding market is regulated in the UK since April 2014 by the Financial Conduct Authority (FCA). In less than two months three platforms have announced they have been fully licensed in the country. These were peer-to-peer lending platforms Lending Works and LendingCrowd and bond crowdfunding UK Bond Network.