During the FY, the regulator filed 68 enforcement actions, which addressed a sweeping range of misconduct and market harm. In addition, it aggressively pursued litigation in over 100 cases, including significant and complex cases charging manipulation, spoofing, and unlawful use of customer funds, and won liability verdicts in both jury and bench trials in US District Courts.

“The CFTC’s enforcement record shows that the CFTC brings critical, high impact cases that protect customers and ensure the integrity and transparency of the derivatives markets we regulate,” said CFTC chairman Timothy Massad. “The work of the Enforcement Division is the instrument by which the CFTC sends the clear and unwavering message to those who engage in wrongdoing in our markets that they will be held accountable,” he added.

In addition, the US regulator issued a single whistleblower award of more than $10 million in FY 2016, which is the largest such award since 2010 when the CFTC Whistleblower program was launched.

The regulator said it undertook in FY 2016 nine actions against registered swaps dealers, Futures Commission Merchants (FCMs) and companies for failure to report accurately and fully critical trading and market information and for recordkeeping violations.

Following is a list of CFTC’s enforcement actions undertaken in FY 2016 by category: 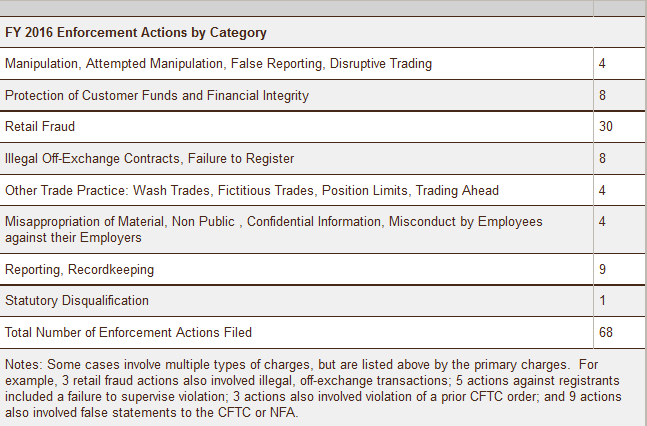 We have informed you that in January 2016 binary option broker Banc de Binary agreed with the CFTC and the US Securities and Exchange Commission (SEC) to pay more than $11 million in settlement in relation to accusations that it worked illegally with US citizens and solicited large amounts.

Vault and GT 365, two other binaries brokers, were ordered to pay combined more than $4.5 million for unlawful off-exchange binary options trading, fraud, and registration violations.  Also, the regulator charged binaries broker Vision Financial Partners and its founder Neil Pecker for unlawfully obtaining about $3 million from clients, as well as International Monetary Metals (IMM) and its former president, Martin Sommers to pay $9.8 million – $2.5 million for fraudulent gains and a civil penalty of $7.4 million, for operating unauthorized and soliciting large amounts from investors.

Meanwhile, the CFTC recently arranged a fine on IB Capital FX (aka IB Capital FX (NZ)) of $35.42 million for providing financial services in the US without being authorized.

Russia’s VTB Bank and its UK unit VTB Capital were also charged with executing fictitious and noncompetitive block trades in RUB/USD futures contracts that were cleared through the Chicago Mercantile Exchange (CME). The companies were ordered to pay a $5 million civil monetary penalty.

The CFTC also fined earlier this year the US arm of forex brokerage IBFX $1 million for failing to meet capital requirements in the period January 15, 2015 – February 5, 2015, and to implementing an adequate risk management program. Later, the broker was expelled by the US National Futures Association (NFA) for this.

Another forex broker that was charged in FY 2016 with engaging in an off-exchange forex contracts fraud was All City Investments (together with its principal Jamal Y. Vance). In addition, Cindium Inc. and Einstein Exchange Group Inc. and their principal Irina Feldman were also charged with solicitation fraud and misappropriation in connection to operating a commodity pool that offered investment instruments, including forex.

In another case, the CFTC charged eFloorTrade LLC, a registered options and futures introducing broker (IB), and its principal John Moore, with record keeping and supervision failures, and with presenting false and misleading statements in a sworn testimony before the CFTC.

We strongly advise you to be cautious regarding your investments and to only choose brokers and investment companies that are regulated by reputable financial watchdogs, such as the CFTC, CySEC, FINMA, FCA, etc.