Forex brokerage Gain Capital Holdings (NYSE: GCAP), the owner of the Forex.com brand, said it does not expect to be affected by the recent announcement of the UK Financial Conduct Authority (FCA) that it intends to alter the regulation of forex trading service providers since its practices are already consistent with the proposed changes.

Following the recommendations and guidelines of the European Securities and Markets Authority (ESMA) from mid-October, the FCA is setting a new leverage maximum of 50:1 (25:1 for inexperienced traders with less than 12 months of trading). It is also banning bonuses or other benefits to promote risky trading instruments.

Gain Capital operates across several jurisdictions, under some of which it needs to comply with similar restrictions as those proposed by the FCA. In the US, for instance, which is the broker’s main market of operation, the leverage cap is also set at 50:1.

“Several of the […] changes proposed by the FCA are consistent with GAIN Capital’s current practices and should not require significant changes to its operations,” the broker said in a statement.

Gain Capital noted it supports the UK regulator’s decision as it will enhance consumer protection in the forex market as it will “curb aggressive marketing to inexperienced investors”.

“Throughout its history the company has excelled at times of regulatory change and views with confidence its ability to navigate the current proposed changes,” Gain Capital said.

However, the FCA news seem to have affected the broker, since its shares have been on the drop ever since the regulator’s announcement and reached $6.17, the lowest value since mid-November. 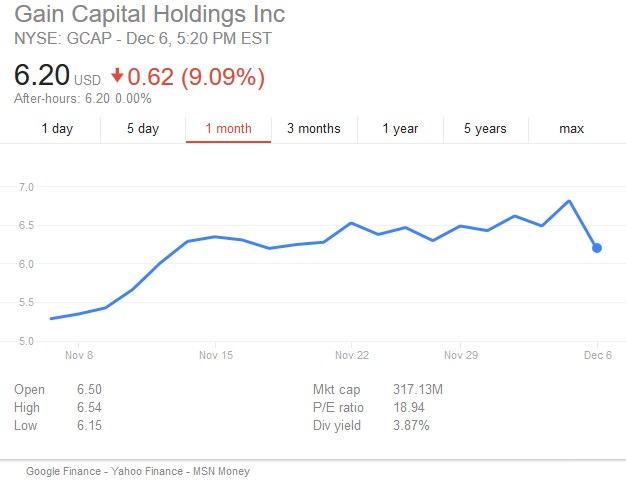 Meanwhile, some of the major UK forex brokers – CMC Markets, Plus500 and IG Group, saw their shares open the market by a double-digit drop on the day the FCA announcement was released. Plus500’s shares plunged 28%, while CMC Markets and IG Group saw even higher drop of 34.6% and 38%, respectively.  All three brokers come out with statements regarding the new industry changes, showing mixed reactions to the proposed regulatory changes.

Gain Capital operates under the trading brands Forex.com and City Index for retail clients and GTX for institutional operations. It offers trading in forex, commodities, bonds, indices, and global equities, among others. It recently launched ForeignExchange.com, a new international service for money transfers.

The brokerage is active in North America, Europe and the Asia Pacific regions. It is regulated in the UK, the US, Australia, Singapore, Shanghai, Dubai, Hong Kong, and Japan.