Forex brokerage IG Group (LON:IGG) has given a new name to its binary options instruments – Digital 100s, data from its website indicates. The broker has not published an official press release regarding the change. It seems the broker has removed the term ‘binary options’ altogether from its dictionary, probably in an attempt to distinguish itself from the recent bad reputation of such instruments.

The trading concept and conditions of the Digital 100s product, however, remain unchanged. 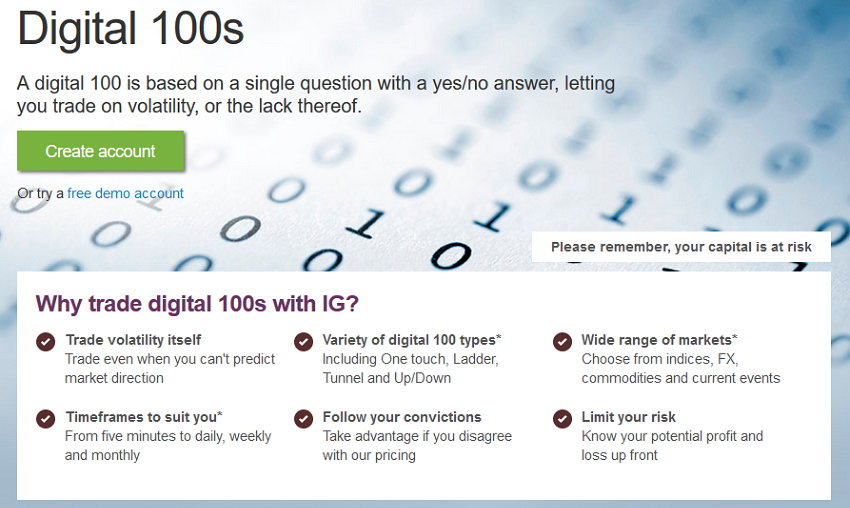 IG Group operates worldwide with offices in 15 countries. It offers access to more than 10,000 markets, including forex, indices, shares, exchange-traded funds (ETFs), and binary options. In the UK it also offers spread betting.

The broker is based in the UK and regulated by the Financial Conduct Authority (FCA), but its subsidiaries are also regulated by the relevant authorities in the countries where they operate. It is a licensed bookmaker by the UK’s Gambling Commission.

In binary options trading, investors guess whether the price of a certain instrument would go upwards or downwards within a pre-determined time frame. Once the time is up, the option is deemed expired and the bet is settled. Depending on the outcome, a trader either collects a profit, or loses money.

This type of instrument, however, is very controversial and often attacked by regulators due to its risky nature. In the forex world, binary options are the closest to gambling. All actions have inevitably affected investors’ attitude toward

Within Europe, most regulators are either imposing stricter rules for trading in binary options or taking steps toward banning theinstruments altogether. In August Belgium banned the distribution via online channels of over-the-counter (OTC) binary options, spot forex, and CFDs with leverage. France has also banned the online advertising of “highly speculative and risky financial contracts”, such as binary options, forex and CFDs with a leverage greater than 1:5. Meanwhile, the Netherlands and Germany have also announced they consider the ban on the advertising of such instruments.

Israel, which is not an EU member state, also imposed a ban on trading in binary option instruments in the country. Recently, the Israeli regulator also said it is to ban the advertising of binaries to retail clients abroad, which would put an end to major brokers will not be able to operate locally-based call centers.

In Canada binary options are not illegal, but not a single broker has been authorized to provide such products. In the US, binary options are restricted to exchange-traded only and the only two regulated exchanges are Nadex and Cantor Exchanges.