US multi-asset brokerage E-Trade Financial Corp., doing business as E-Trade, generated a 41.7% growth in net revenue to more than $1.9 billion in 2016, compared to a year earlier, the brokerage said last week.

“[…] 2016 marks our strongest earnings in 10 years, demonstrating our commitment to managing expenses with discipline, deploying multiple capital initiatives, and diminishing risk associated with our legacy loan portfolio,” said Karl Roessner, E-Trade Financial Corp. CEO. “With balance sheet expansion already well under way, and the team aligned and marching forward on our business growth objectives, I am confident in our ability to continue to create long-term value for our shareholders in the years to come,” he added.

Revenue from commission fees increased both for the entire 2016 and for Q4 to $442 million and $122 million, respectively. In October-December, the brokerage charged a commission of an average $10.42, which is slightly below the value reported for Q3 and for Q4 the preceding year.

Following are details about the broker’s financial performance for 2016 and the last quarter of the year: 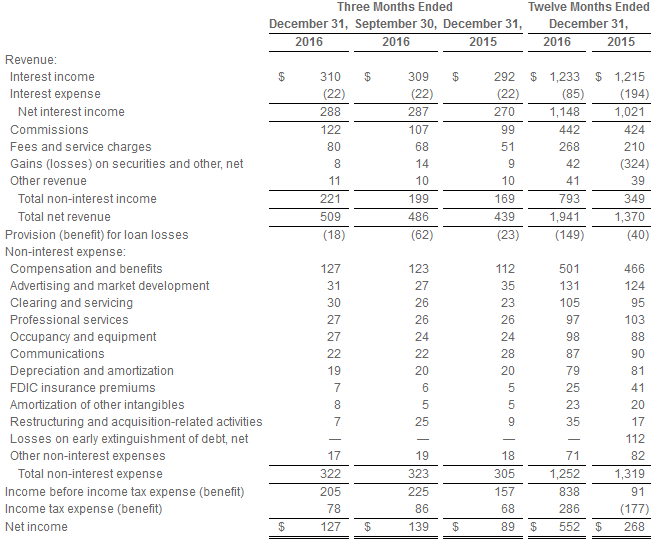 Customer accounts with E-Trade stayed rather flattish on the quarter to 5.2 million at the end of December, but posted an annual increase of 6%. Brokerage accounts numbered nearly 3.5 million at the end of last month, after the broker added 24,028 new ones during the last quarter of the year. More details follow: 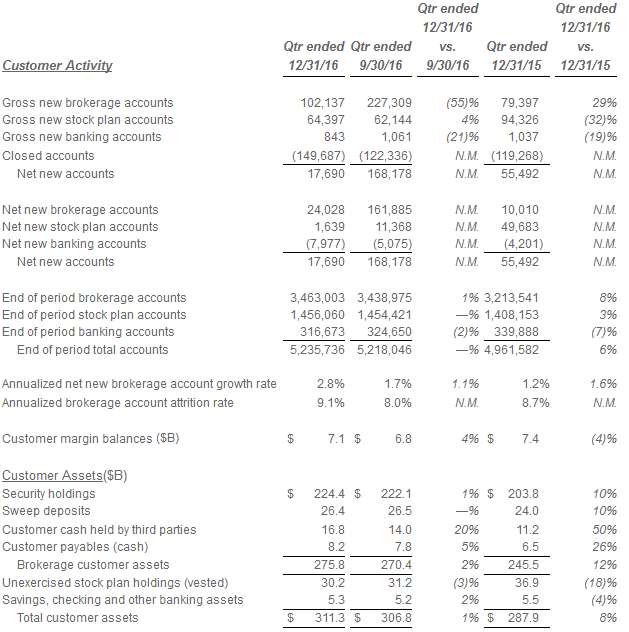 “The acquisition of OptionsHouse provided the catalyst to realign the leadership team and refocus the entire Company on business performance. After taking a hard look at our structure and list of projects, we exited 2016 as a leaner, more agile organization, poised to reclaim our position as the best home for active traders and investors alike, with the number one options platform in the industry,” Roessner noted.