Japan’s Invast Securities started 2017 strong with an operating revenue of JPY 381 million in January, posting a growth of 40% from the preceding month and 9.5% from a year earlier. January is traditionally the strongest month for the broker. 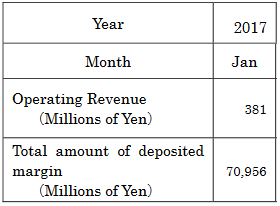 In comparison, the broker reported an operating revenue of JPY 272 million in December and JPY 348 million in January last year.

Meanwhile, the total deposited margin reached a new record-high of nearly JPY 71 billion last month. The figure represents a slight increase of 0.3% both on the month and on the year.

Invast Securities, based in Tokyo, consists of a group of companies regulated by the Japanese Financial Services Agency (JSFA) and the Australian Securities and Investment Commission (ASIC). The company offers trading in forex and contracts for difference (CFDs).