Saxo Bank, a Danish bank specialized in providing online trading services, reported on Friday it turned to a consolidated net profit of DKK 302.4 million in 2016 from a net loss of DKK 644.6 million a year earlier. The group’s operating income stood at DKK 2.9 billion in 2016, posting a significant growth of 37.8% over the year.

In 2015, the forex bank was heavily affected by the effect of the unpegging of the Swiss franc (SHF) from the Euro (EUR) in the beginning of the year.

“We are satisfied with the result for 2016 which reflects our commitment to democratize trading and investment to enable our clients to take part in global capital markets. We expect to grow the business further in 2017,” Kim Fournais, Saxo Bank CEO and co-founder, said. 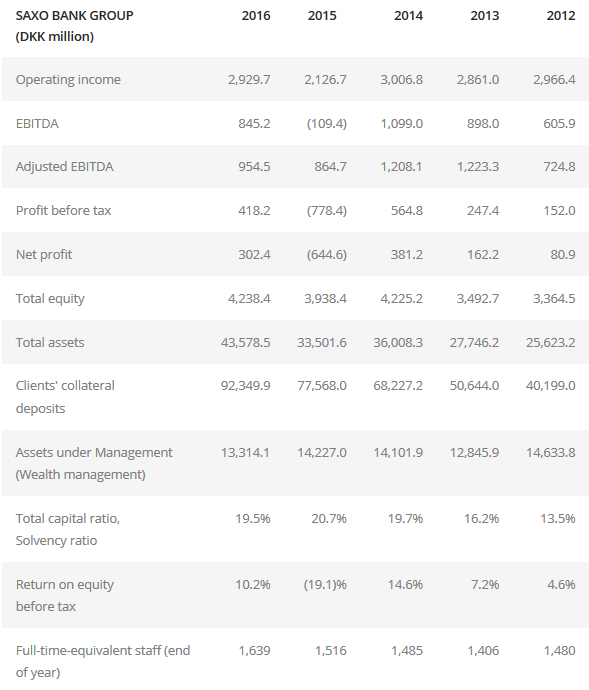 “Cost continued to be a main focus area in 2016 and has been reduced, however we have increased spend in efficiency gain development and service quality for clients,” the bank said. It seems, cost cutting will continue in 2017, as well. Just recently, it closed its Cyprus-based branch and moved its clients to its offices in Prague, Dubai and Copenhagen.

Saxo Bank also reported its clients’ collateral deposits reached a new historic highs to DKK 92.3 billion at the end of 2016, which is up by almost DKK 15 billion from a year earlier.

Earlier this year, Saxo Bank reported its trading volume for 2016 jumped 17.4% to nearly $3.2 trillion from $2.7 trillion a year earlier.

“With a total of 490,000 client trades on 9 November 2016, the day after the US election, Saxo Bank reached a new record in trading activity,” the company noted in a press release to its annual financial report.

During the year, the bank continued to develop its offering and to expand its client base. For instance, in September it launched the first truly digital trading solution for corporate and government bonds.

“Our investments in technology and products in 2016 complement our existing strong offering and allow us to cater to new client segments, such as the launch of the market’s first fully digital bond trading solution and SaxoSelect, our digital and automated investment service, aimed at clients looking for a discretionary way of participating in global financial markets,” Fournais noted.