Institutional forex broker Hotspot FX, part of BATS Global Markets, said it generated a trading volume of $683 million in March 2017, which is the highest for the past 13 months. The figure is 26.6% higher than a month earlier and 32.8% higher over the year.

The broker’s average daily volume (ADV) stood at $29.7 million which is the highest since November, when ADV was $30.4 million.  The highest volume generated in a single day last month was recorded on 16 March and was $38 million, while the lowest daily value of $21 million was registered on 20 March.

Following are Hotspot FX’ monthly trading metrics for the past 13 months: 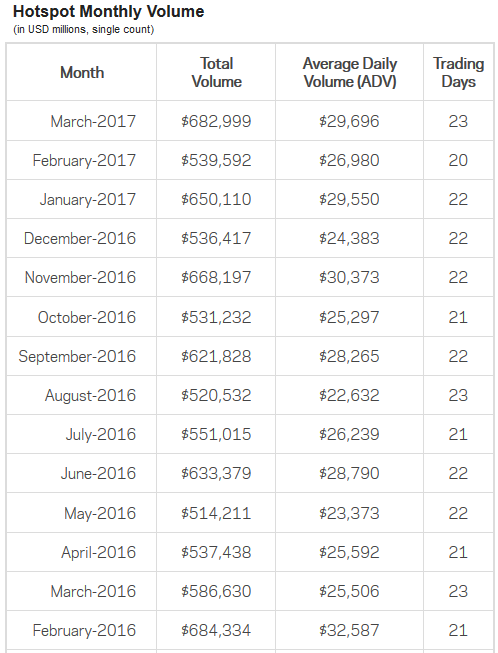 BATS Global Markets is a US-based operator of exchanges and services for financial market. It is headquartered in Kansas City and has offices in New York, London, Chicago and Singapore. The company owns four US equities exchanges – BZX, BYX, EDGX, EDGA, one European equities exchange – Bats Europe, one US options exchange – Bats Options, in addition to Hotspot FX, which it acquired in January 2015.

BATS Global Markets was recently acquired by CBOE Holdings Inc., which is one of two options exchange operators in the US. The deal was closed in late February.