Monex Group, a leading forex brokerage in Japan, reported on Wednesday its consolidated daily average revenue trades (DARTs) from global operations stood at 257,717 in March 2017, the lowest reported value for the past five months. The figure represents a slight decrease of 1.9% from a month earlier and an annual drop of 10.6%.

The holding company also provided trading metrics for two of its main subsidiaries – Monex Inc., the group’s main Japanese unit, and TradeStation Group, which is in charge of the group’s operations in North America and Europe.  Monex Inc.’s March DARTs also went down both on the month and over the year to 157,294. Meanwhile, TradeStateion Group’s DARTs stood at 101,121, which was up by a monthly 1.5% and down by 10.3% year-on-year.

Monex Inc. handled 235,137 over-the-counter (OTC) forex accounts in March, of which 65,175 were active ones. TradeStateion Group, on the other hand, handled 63,024 active client accounts. Details follow: 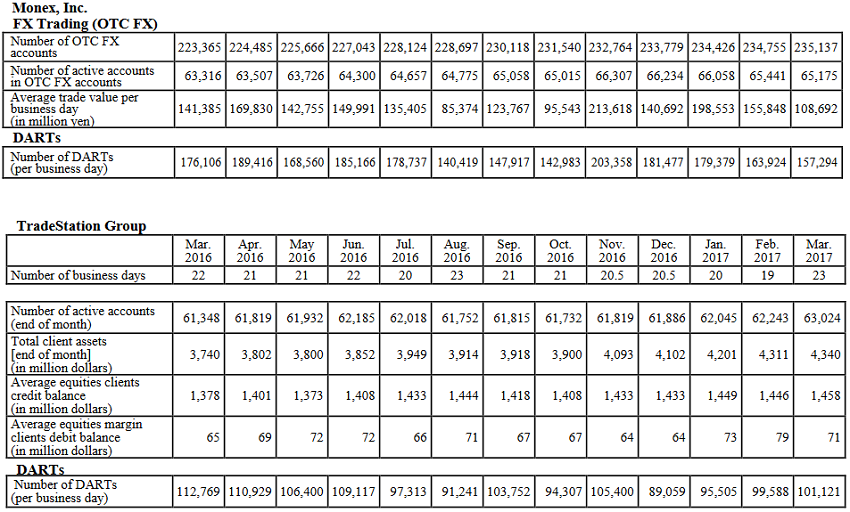 Monex Group operates internationally and consists of a group of companies based in Japan, Asia, North America and Europe. It operates under three retail trading brands – Monex, TradeStation and Boom. The majority, or about 60%, of its revenue comes from operations in Japan and the remaining 40% from operations in the US. It did not provide trading metrics about its other subsidiaries.