The scam, operates on the principle “send a little, get a lot”, which in facts dates to the pre-social media era in the form of the Nigerian scams, and uses fake Twitter accounts of celebrities like Elon Musk, John McAfee, the Ethereum co-founder Vitalik Buterin and Warren Buffet. Then the fake account responds to a tweet from the genuine account of a celebrity, creates a thread and announces a cryptocurrency giveaway.

They appear genuine, unless you are paying attention to the small details, and promise to give you a relatively large quantity of Bitcoin or Ether (say, 2 BTC or ETH), if you send a small quantity (say 0.02 BTC or ETH) to a given wallet address. 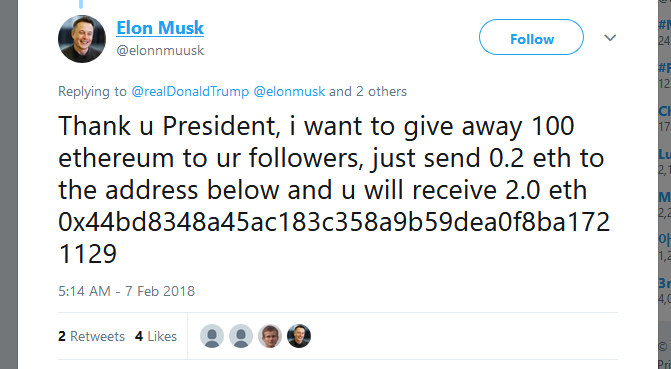 “It’s like a social media impersonation mixed with a classic Nigerian prince scam,” Crane Hassold, a threat intelligence manager at the security firm PhishLabs, who previously worked as a digital behavior analyst for the FBI, told Wired.

The fake accounts started popping up in the beginning of February and Twitter has already started shutting them down. Meanwhile, however, BleepingComputer reported that the scammers have made over $5000 in ETH in one night alone, with the fake accounts John McAfee, Vitalik Buterin, and Elon Musk getting the most transfers.

According to the site, the sum may actually be much bigger, but this is what they managed to intercept.