Pre-tax income from brokerage activities wwas $235 million in the first three months of the year, while that from was $20 million, which is an annual jump of 361% and a decline of 26%, respectively. Brokerage net revenue was $347 million.

The broker’s consolidated pre-tax profit jumped to 69% in the period under review from -65% in the first quarter a year earlier. Pre-tax profit margin from electronic brokerage services wento to 68% in the first quarter from 18% a year earlier, while that from market making activities declined to 34% from 40% in the same period of the previous year.

The results for the quarter were positively impacted by strong growth in commissions and execution fees and net interest income, which increased 11% and 37%, respectively, from the same period in 2015, the broker’s statement read.

The results were positively affected with a $123 million gain on the broker’s currency diversification strategy from the weakening of the US dollar against other major currencies. A year earlier, the broker suffered a loss of $197 million, some $121 million of which were due to the sudden large movement the Swiss franc, which was unpegged from the Euro at the time.

In addition, the results for the quarter include a $123 million gain on the broker’s currency diversification strategy due to the weakening of the US dollar against other major currencies, compared to a loss of $197 million recognized in the same period in 2015.

Interactive Brokers’ total assets amounted to $50.2 billion at the end of March, up from $48.7 billion at end-December 2015.

In comparison, Plus500, a UK-based online forex group, posted a record-high quarterly revenue of $85.2 million in the first quarter of 2016, while its Japanese peer Money Partners Group saw its revenue growing by an annual 5.9% to about JPY 1.7 billion, or about $15.6 million.

Interactive Broker’s group trade volume was 91.1 million trades in January-March, or an average of 1,527 per trading day. The daily average revenue trades (DARTs) numbered 748,000 in the quarter under review, which represents an annual increase of 15%. The broker has said earlier its DARTs were 830,000 in January, after which they fell to 767,000 in February, and even lower to 658,000 in March.

The group companies handled 38.5 billion contracts in the first quarter, which is 9% higher than in the last quarter of 2015. The majority of contracts were in the stock broking segment. Following is a detailed information regarding Interactive Brokers’ group performance: 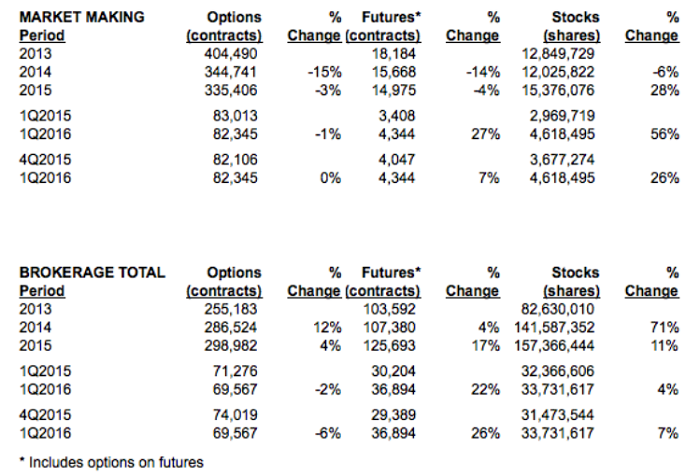 Connecticut-based Interactive Brokers is a broker and a market maker. It, together with its numerous subsidiaries, offers online automated trading of stocks, options, futures, forex, bonds, contracts for difference (CFDs) and funds to traders, investors and institutions in over 100 market across the globe. It has offices in the North America, Europe, Australia, and Asia. The group companies holds licenses by the relevant authorities in the US and the UK.